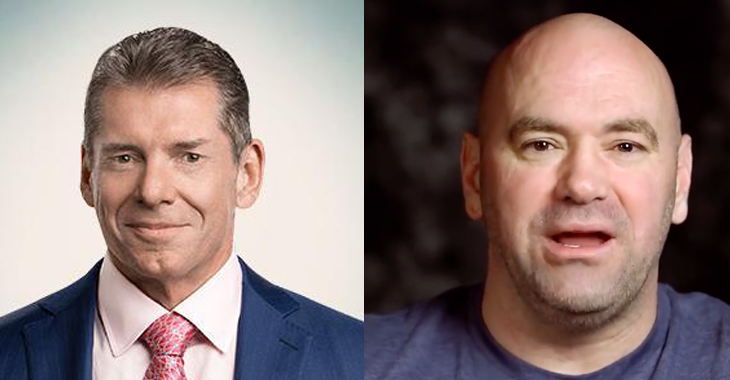 Newly signed Bellator MMA fighter Chael Sonnen is about to be a very busy man, if he keeps up with everything that he is doing now and fighting again. The ESPN MMA analyst, host of his own “You’re Welcome” podcast, just signed a multi-fight deal with Bellator MMA with the news being first released by the Associated Press on Thursday.

On Friday, a new episode of Sonnen’s “You’re Welcome” podcast was released and the “American Gangster” let all his listeners in on a little story of the battle between WWE’s Vince McMahon and UFC President Dana White back in the days of the UFC being broadcasted on Spike TV. If Sonnen’s story rings true, MMA fighters in general can thank the WWE boss for helping boost fighter’s pay in a very big way.

“Dana White really admires Vince. He’s always liked Vince, he doesn’t always say that publically. He’ll simply say, ‘Well I got a lot of respect for him’ and that’s where he’ll end it. But, he really does admire him and the WWE business model is what the UFC copied… The way the royalties work, the backends work, the locker room bonuses, if you will, all the negotiations. Just the way it works, it’s very close to the WWE’s model and Lorenzo Fertitta came out as much as to say, ‘Look we studied everybody from the Yankees on down, it’s the WWE that we decided to model ourself around.”

“This is a great story. This is the hottest story in MMA and it’s never been told and I’m gonna do it right now,” Sonnen said. Alright, so here it is.”

“Well at that time, “The Ultimate Fighter” was on Spike TV. When it was on Spike TV, it was on Monday night and it came on RIGHT after RAW. So, Vince McMahon called Dana White and the problem Vince had was that they were advertising “The Ultimate Fighter” during RAW. So Vince is saying to Dana privately, ‘Why would anybody watch my scripted show when they can just wait till it’s over to watch your real show. Stop advertising to my audience.’ And Dana shot with him and goes, ‘Vince, I’m on Spike, you’re on Spike. That’s where it ends. Who Spike decides to run the marketing and the advertising and to piggyback off of, man, it’s got nothing to do with me. And Vince again puts it on Dana and says, ‘Do not advertise your show during my show again.’

“Now, Dana is kind of sitting there shrugging his shoulders going, ‘I’m the wrong guy to be calling.’ Anyway, OK, move on to the next part. Mike Goldberg is an announcer for the UFC. All he does is announce. Now, in all fairness, as great as he is, he is extremely replaceable. I mean, you can replace announcers, right. They were only doing four or five shows a year back then. It wasn’t the same thing as having Mike Goldberg go somewhere now.

“The night I was going to fight on my debut, the heavyweight championship was on the line that night. It was Andrei Arlovski. Andrei Arlovski, who is the face of the company at that time because Randy Couture had retired and Tito Ortiz was in this big pissing match. Andrei Arlovski is the new face. He’s selling all the tickets. He’s doing absolutely everything. He’s getting $18,000 to show and $18,000 to win. Now, there wasn’t really sponsors back then. There was definitely no “Fight of the Night,” backdoor, pay-per-view bonus, none of that even existed. So he’s looking at 18 and 18 to headline a card with the biggest prize in all of sport. That’s extremely relevant to this story.

“That week, Vince McMahon contacts Mike Goldberg and he tells Mike Goldberg, ‘I will give you a hundred thousand dollars to no-call, no-show the UFC on Friday. So Goldberg doesn’t get to warn anybody. He just can’t show up and he can’t call in. He just needs to stick them without an announcer. Goldberg does the right thing and the very first person he calls is Dana and Vince tells [Goldberg], ‘This call never happened and I will wire you this money for your work.’ Goldberg calls Dana and says, ‘Here is what just happened.’

“Dana not only gives Mike Goldberg a brand new half a million dollar contract, but right then realized ‘[McMahon] is willing to pay $100,000 for my announcer, who is replaceable, and I’m only paying my main event 18 and 18, I got a problem. This is a level of thinking, of strategy, of business play that I’m just not ready for.’ Dana White is only like 45 right now. So in 2005, this is a young guy. He’s 32, 33, he’s still trying to figure the world out and he realizes right then, this is tough. This is a level of thinking, that I’m just not competing at this level right now.

“That is the number one hottest story in the history of MMA and it has never been told and there it is.”