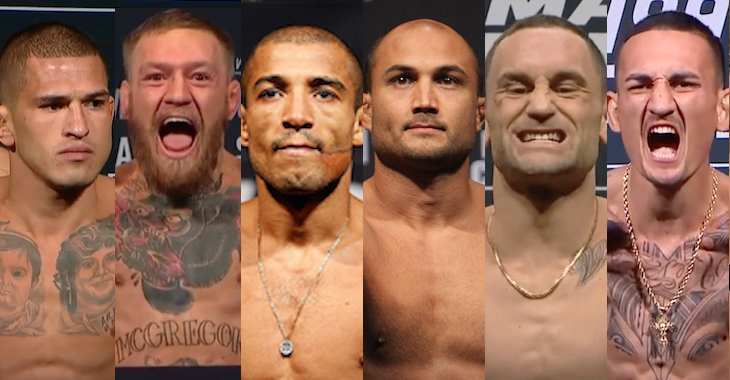 In just one month’s time, former two-division UFC champion BJ Penn will make his long-awaited return to the Octagon. He’ll be taking on the talented Ricardo Lamas in the five-round, featherweight main event of the UFC’s October 15 return to the Philippines.

Should Penn win this bout with Lamas, who has long stood out as one of the best featherweights in the world, he’ll take a massive step up the divisional ladder, where bouts with monsters like Jose Aldo, Anthony Pettis and Max Holloway could await.

In advance of his bout with Lamas, BJ Penn offered up his thoughts on these potential future match-ups in an exclusive interview with BJPenn.com’s “Rapid Fire.”

Penn first touched on a possible bout with interim featherweight champion Jose Aldo, who is ruling the division in the absence of undisputed champ Conor McGregor. Penn explained that because he’s trained with Aldo in the past, this is a fight he’ll avoid unless Aldo holds the division’s undisputed title.

“You know what, I don’t wanna go out there and challenge Jose Aldo,” Penn said. “I would never want to see Andre Pederneiras standing across the ring from me. I guess those are like his kids over there. That’s all stuff where we’re going to have to cross that bridge when we get there. Right now Jose Aldo is not the [undisputed] champion, so we’re not focused on him in any way.”

Next up, Penn weighed in on the recent featherweight arrival of Anthony Pettis, saying he’s happy to have the dynamic former lightweight champion in the division.

Finally, Penn gave his thoughts on fellow Hawaiian Max Holloway, who is currently on a division-best nine-fight streak.

“That’s an awesome win-streak,” Penn said of Holloway’s recent run. “I didn’t know he had a nine-fight win-streak, that’s pretty good man.  That’s pretty tough to do in the UFC. Max Holloway, that’s another one too. He’s out there, he’s one of the top guys. He’s great, he’s real fast, he’s a good height, got good size, good range for the division, he’s another one of the great fighters out there.”

In the end, however, Penn expects he’ll have to face all three of the aforementioned fighters on his way to earning a world title in his third UFC weight class.

“In the end, I’m probably going to have to fight all these guys. We don’t know who’s going to end up with the title, but I’m just focused on who has the title, and making that third run to the world championship.”

“I’m just really excited and I want to get this third title. I talked to Greg Jackson and he was like ‘man, then you can really relax and think about all the accomplishments after you get that third world title.’ And in my head, I 100% know I’m going to get that [featherweight] belt.”

How do you think BJ Penn matches up with Jose Aldo, Anthony Pettis and Max Holloway? Sound off, PENN nation!