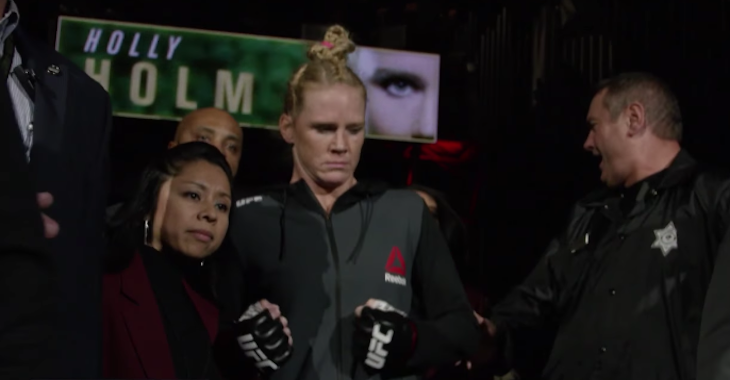 This morning, USADA paid a visit to Cris Cyborg today for her third test in a month. There was no problem, except for Cyborg wants the same testing frequency for her potential opponent Holly Holm, or any opponent for that matter. Does this mean they’re still in negotiations? Either way, Cyborg took to Twitter to make her request known and eventually drew out a shade-filled response from Holly Holm herself.

I’ve actually just wasted a minute of my life on this video.

“So, apparently there was a little bit of drama today because USADA went to Cyborg’s house. I know I’ve been the topic of interest a lot on her social media and I don’t mind fighters trying to promote fights and that’s fine, but lets be real for a minute: She said she’s been tested by USADA and wants to me to be tested just as much. She probably should have looked on their public records on their webpage and seen Iv’e been tested nine times compare to her eight. I’m in no race, I really don’t care. I just know I compete clean and I’m tested all the time, I just never needed an applause for passing my test. In the meantime, I will just spend my time training and she can spend her time complaining and making false accusations and false memes.” — Holly Holm on her official Instagram.

I want a guarantee @hollyholm is tested same number of times as me during this camp @UFC @usantidoping her gym has a history 2! I’m clean

3th visit from USADA in less than a month.
Let’s go see if my next opponent is doing exams in the same proportion I’m doing! 👀 website guys pic.twitter.com/2K8epQj91R

Above is just two of the string of tweets Cyborg has released on Holly Holm today. The good news is, Holm has been tested as much as Cyborg. Actually, she’s been tested even more. Holly Holm added screenshots to her Instagram post from the USADA website to back up her statement, showing she has been tested nine times to Cyborg’s eight. Now that this is settled, can the UFC and both management teams finally get this fight finalized? We’ve gotten huge announcements about UFC 217, UFC 218 and even a surprisingly stacked UFC Winnipeg card, but nothing for UFC’s end-of-the-year big blowout card UFC 219. Holm fighting Cyborg is one of the biggest women’s fights to make right now and there’s barely anyone else that Cyborg can defend her featherweight title against right now.