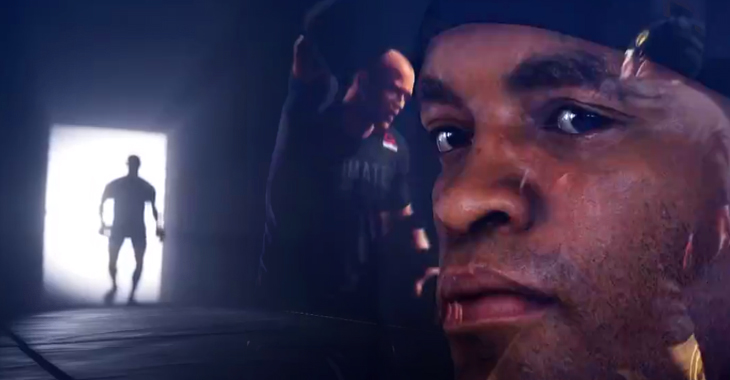 Earlier this month, we got a sneak peak behind the scenes of the new EA Sports UFC 3 video game thanks to Angela Hill in a motion capture suit. Other than that, we haven’t gotten much news about the third installment in the EA UFC franchise. For those who wanted more, a new teaser dropped today letting us know that we have a full trailer to look forward to this Friday. We get flashes of Joanna Jedrzejczyk, Demetrious Johnson, Georges St-Pierre, Anderson Silva and Conor McGregor. It also gives us reason to put on our tinfoil hats regarding a very interesting freeze frame.

Get Ready for Round 3 #EAUFC3

Take this as you will, but in the 12 second teaser of EA Sports UFC 3, the last flash is Conor McGregor facing off with Tony Ferguson. pic.twitter.com/jxt5HmNYC3

Wait, is that who we think it is at the end of the teaser? Of course it could mean nothing at all, but it looks like Conor McGregor is facing off with none other than Tony Ferguson for a split-second. Regardless of the possible real life implications of the face-off, it’s interesting to see a staredown in the video game complete with suits. This is something that wasn’t featured in any other installment.

EA Sports UFC 3 is scheduled to come out in early 2018 and the only known fighters currently on the roster other than the ones listen above are Carla Esparza and Kailin Curran. It’s safe to expect a larger roster than its predecessors as well as the usual DLC and/or “secret” character.

“EA Sports UFC 3, the third entry in Electronic Arts’ series of simulation mixed martial arts games, is scheduled to be released in the fourth quarter of EA’s 2018 fiscal year, the company announced today. That’s the first quarter of the 2018 calendar year — the game is slated to arrive between Jan. 1 and March 31, 2018. EA appears to be on a two-year cycle with its UFC franchise: The original EA Sports UFC launched in June 2014, and its sequel, EA Sports UFC 2, debuted in mid-March 2016.” — via Polygon back in May of this year.