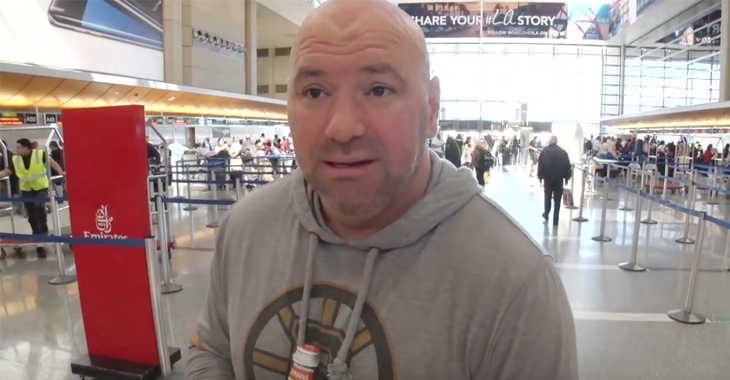 Mousasi caught Weidman with a pair of knees during the midway point of the second round that had the former champion in a world of hurt.

With that said, the referee stepped in and put a stop to the action following Mousasi’s second knee as he believed both of Weidman’s hands were on the floor, thus making the strike illegal.

However, upon viewing the replay it was clear to see that Weidman had actually lifted both of his hands off of the canvas just micro-seconds before getting hit by the second knee from Mousasi, meaning the strike was in fact legal.

After some major in cage confusion, the referee stepped forward and waved off the contest announcing Gegard Mousasi the winner via technical knockout.

Following the UFC 210 event, UFC president Dana White was asked to give his thoughts on Mousasi’s contr

“Yea you know obviously there was a mistake made and it was the referee who made a mistake. And I think, well I was just telling Chris’ team that if he would have jumped right back up then I think the fight would have continued. But Chris sat there and then they looked at the tape, which they’re not supposed to do, but a lot of things happened. If you look at the way that the fight was going, Mousasi was on his way to winning that fight. If the thing doesn’t go to the ground, you know hey does Chris Weidman fight out of it? Anything is possible. But, you know… I obviously hate to see things end this way but it is what it is.”

Dana was then asked if he plans on resigning Gegard Mousasi, who is now a free agent.

“Hey listen I am the one who brought Gegard in. I am a big Gegard fan, I always have been and I don’t know. We will see what happens.”

Do you think the UFC will resign Gegard Mousasi who is currently riding an impressive five fight win streak? Sound off PENN Nation!