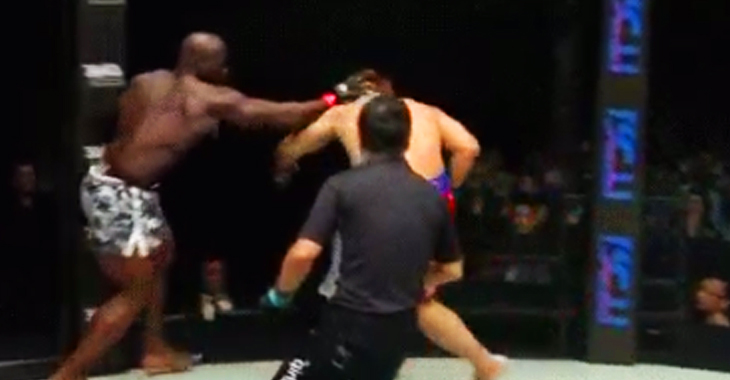 Fight fans can look forward to UFC Pittsburgh tonight. but if you were fiending for a fix then ONE Fighting Championships had you covered earlier today. Sometimes, it pays to branch out because your efforts are rewarded with ridiculous highlights. Alain Ngalani’s fight with Hideki Sekine is a perfect example. These two wasted no time at all, as Sekine ran at Ngalani like a man possessed. Like some sort of playground bully in a sitcom, Ngalani kept Sekine at arms length and knocked him out in just 11-seconds while running freakin’ backwards.

Both of these heavyweights look like they could have been ripped from Marvel comics and move like men in two weight classes below. A burly third-degree black belt in Judo, Sekine was undefeated until he got beat in his title fight with ONE heavyweight champion Brandon Vera. Unfortunately, he’s back in the losing column thanks to multi-time muay thai and kickboxing world heavyweight champ Alain ‘The Panther’ Ngalani, who has his own title aspirations. What may be even more impressive than his performance, is that he basically predicted exactly how the fight would go yesterday.

“He looks like he would love to apply a takedown and finish with a submission, but my takedown defense is on point right now, and even on the ground I am a beast. Now, dare to stand up with me, Hideki [Sekine], or have it any way you want. When I close my eyes, I see Hideki trying to apply pressure to take me down. It cannot be any other way. I see him succumbing to my kicks or punches, though.” — Alain Ngalani speaking to Local New Singapore before his fight with Sekine.