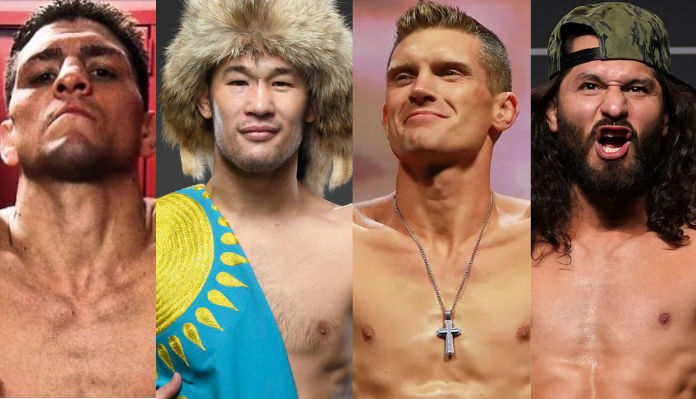 Stephen ‘Wonderboy’ Thompson has a suggestion for the UFC after Shavkat Rakhmonov called him out following his latest win over Neil Magny last weekend. The ‘Kazakh’ won via submission in the second round to take his undefeated streak to 16-0.

Shavkat Rakhmonov makes it 16-0 with 16 finishes and now he registered his first top 10 win over Neil Magny who has wins over likes of condit, gastelum, Lawler, Johnny Hendricks, Neal, Griffin etc. And shavkat made it look easy against such a guy. Shavkat is problem 🔥
UFCVegas57 pic.twitter.com/EsaiuvmZch

The #10-ranked welterweight named Stephen Thompson in his post-fight interview and later mentioned Nick Diaz and Jorge Masvidal as people he’d like to fight next.

Speaking on his episode 51 of his YouTube show, Wonderboy said,

“He called out me, (Jorge) Masvidal, and Nick Diaz. I feel like us three should just have… us three fight, four-man tourney. See who stays in the divish. Loser’s gotta get out. I like that idea…Let’s do it, dude. UFC, make it happen. I think that’d be really cool. A little tourney.”

Rakhmonov has garnered a significant amount of hype since arriving in the UFC in 2020. Since then, the 27 year old has racked up five straight victories with all of 16 of his pro wins coming via stoppage. The M-1 Global veteran is also the only man ever to finish Michel Prazeres. And following his impressive win over Magny he’s now earned back to back performance of the night bonuses.

Speaking to reports after the fight, Rakhmonov doubled down on his Wonderboy call-out while giving a couple of other intriguing options.

“I’m not going to rush. I’m going to take my time and rest and assess everything with my team. But the names I want to face are Stephen Thompson, Nick Diaz, (Jorge) Masvidal. Let’s go.”

Many fans have been pushing for Rakhmonov to face surging another surging prospect – Khamzat Chimaev. But with the Swede ranked 7 places higher in the rankings, it makes sense for him to fight someone like #7-ranked Wonderboy in the interim.

Wonderboy is a big name and also a former title challenger, although he’s currently going through a minor slump having suffered back-to-back losses for only the second time in his career.

In the wake of the call-out, the 39-year old says he’s received an avalanche of messages encouraging him to take the fight.

“What’s crazy is literally the entire population of where he’s from messaged me,” said Wonderboy.

I only had like 18 messages but after that fight I’ve got a hundred and something. Just like ‘Fight him! Fight him!’ Or just emojis of the flag. And it’s always broken English. ‘You. Fight him,'” he added.

For his part, it sounds like Wonderboy is definitely up for taking on the challenge. And he would also love to involve Diaz and Masvidal – (He’s expressed an interest in fighting Diaz and rematching Masvidal in the past.)

“Whatever, man. Let’s go. We’ll see. Everybody’s calling me out. Not just me, but Masvidal and Nick. So we should just have a three-way. Sounds kinda weird, but still,” said Wonderboy. 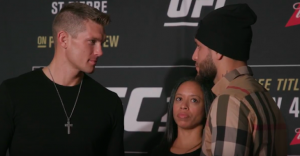 Do you want to see a 4-man tournament involving Thompson, Diaz, Masvial and Rakhmonov?