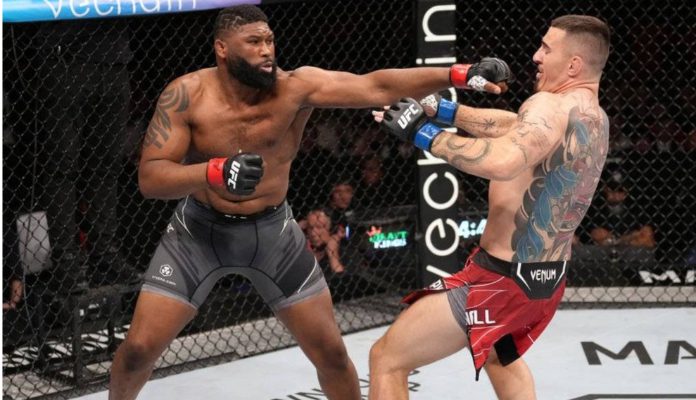 In the main event of UFC London, Curtis Blaydes headed into enemy territory to take on rising contender Tom Aspinall.

Blaydes entered the fight coming off a KO win over Chris Daukuas back in March after earning a decision win over Jairzinho Rozensturik to get back into the win column. Aspinall, meanwhile, defeated Alexander Volkov by first-round submission last time out.

In the end, it was Blaydes winning by TKO as Aspinall’s knee looked like it blew out just 15 seconds in. It was a massive disappointment for the hometown crowd and now after UFC London, here is what I think should be next for both men.

Curtis Blaydes wanted to prove he still is a legit title contender and went into enemy territory in London to face the rising contender in Tom Aspinall. Right when the bell rang, the two went after it and exchanged punches and leg kicks. Yet, after Aspinall landed a leg kick he stepped back and it appeared his knee blew out stopping the fight.

Although it was not the way Blaydes wanted to win, he still got the win on his record and now he made it clear before and after the fight, he wanted the winner of Ciryl Gane vs. Tai Tuivasa. The fight makes sense to determine the next heavyweight title challenger and perhaps in the future Blaydes and Aspinall will run it back.

Tom Aspinall’s first UFC loss came due to an injury and will now need several months of rehab on his knee. It’s still not known the exact severity of the injury but if he needs surgery, Aspinall might not return until next summer.

Given Aspinall’s timeframe is not known after his injury loss to Curtis Blaydes at UFC London, the state of the heavyweight division could be much different. One fight that could make sense when he does return is to face Jairzinho Rozenstruik who is a perennial top-10 opponent and a good foe for Aspinall to try and return to the win column once he is he healthy.

What do you think should be next for Curtis Blaydes and Tom Aspinall after UFC London?