Jared Gordon is at it again!

The New Yorker showcased how formidable UFC fighters can be in real-life altercations when he subdued a man who attacked him with a baseball bat – but the 155lb-er has experience in this area having been forced to defend friends and family from wild attackers on numerous occasions in the past. 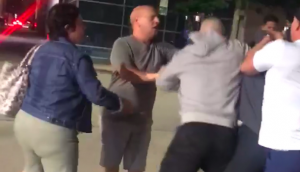 This time, ‘Flash’ was walking with his family when he was allegedly accosted by the individual who is seen being taken down and put on his back by Jared Gordon in the video. The 33-year-old posted the footage with a caption that read,

“Here’s me subduing a guy with a bat after he tried to attack my family and I with it. I don’t know how I restrained myself from beating his face in. My mother then went Karen and wanted to call the cops.”

“I’m so glad no one was hurt. Well done @jaredflashgordon How come it never happens to me?”
Meanwhile, UFC middleweight Erik Anders remarked,
“Is it bc he had on glasses you didn’t hit him?”
Another interesting comment came from MMA coach Tyson Chartier who said,
“Imagine being in a foot lock while also having a bat across your throat lol. I gotta assume this dude didn’t think this would be the end result.. Jeez man glad nobody got hurt and good work defending your fam.”
Din Thomas also chimed in to point out that Jared Gordon is no stranger to this kind of trouble and said,
“Nobody got more street fights on camera than you.”
It’s an astute point from the UFC veteran. This was not Jared Gordon’s first rodeo. This is not even the first time he’s been recorded protecting his family from a bat-wielding stranger! Aside from dealing with a very similar incident in Chicago in 2019, the 33 year old wa told Bloody Elbow that he ‘nearly lost three fingers’ ahead of his fight with Carlos Diego Ferreira at UFC Fight Night 126 in February 2018 after he was involved in a street fight with multiple assailants.
CCTV footage emerged of the brawl in which alleged gang members spat at a former student of Jared Gordon’s friend as they were walking by and swung at him which sparked the confrontation.