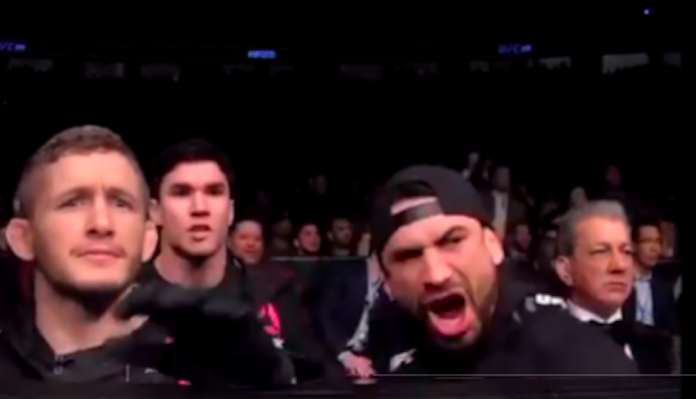 In the first bout of the stacked UFC 235 main card last Saturday, former UFC bantamweight king Cody Garbrandt stepped into the Octagon with dangerous Brazilian contender Pedro Munhoz. The goal for the fighter they call “No Love” was to rebound from a pair of knockout losses to reigning champion TJ Dillashaw. Unfortunately for the former champ and his throngs of dedicated supporters, things did not go the way he planned.

Mid-way through the first round, Garbrandt found himself rattled by an inadvertent head butt, and in a dazed frenzy, abandoned strategy in favor of a wild slug fest. The two bantamweights began strafing each other with massive punches — many of which landed — until Garbrandt was face-down on the canvas.

As you can probably imagine, Garbrandt’s coaches were not happy to see him abandon technique the way he did. They were even less happy when he ended up unconcious.

See a live reaction from Cody Garbrandt coaches Chris Holdsworth and Danny Castillo, pulled from the UFC’s popular The Thrill and the Agony series, in the video below.

Interestingly, Bruce Buffer also seemed to be quite disappointed with Garbrandt’s performance. In the replies to the Tweet above, some fans speculated the UFC announcer might simply have been reading the room. Others, however, believe he might have had some money riding on the former champion.

With this loss, Cody Garbrandt is now on a three-fight skid — all knockouts. Prior to this skid, Garbrandt went 10-0 to start his career, authoring dominant wins over respected names like Thomas Almeida, Takeya Mizugaki and Dominick Cruz.

What do you think the future holds for the former champ after UFC 235?