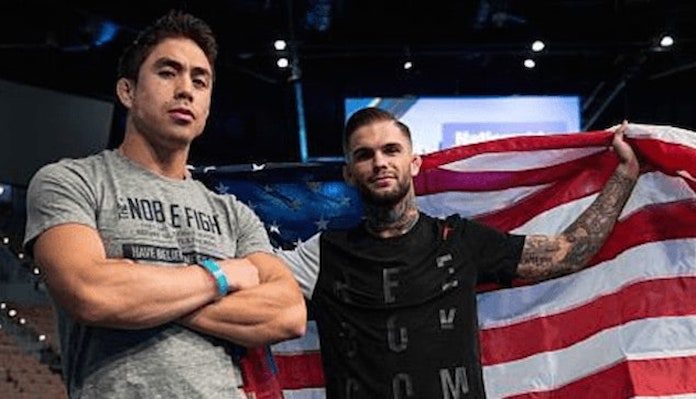 Buchholz continued, explaining that the poor coaching at Team Alpha Male is a product of founder Urijah Faber’s “ego.”

“If you think of it like football, it’s like the owner of the team got jealous of the head coach and then showed up on the field and started coaching instead of sitting back and kicking his feet up saying, ‘I started the team, I own the team, everything you do makes my shine brighter’” Buchholz explained. “But some people can’t understand that because they can’t see past their own ego.

“You can say whatever you want but the results speak for themselves. Cody’s only fights against top-10 opponents are Pedro Munhoz, T.J. Dillashaw, and then Dominick Cruz, and Dominick Cruz was the best out of all of them and he master-classed him but he couldn’t get past those other guys. It has a lot to do with coaching, the program, it’s all that.”

Needless to say, Justin Buchholz and Urijah Faber are no longer close. In fact, it’d take some serious apologizing on Faber’s part to ever convince Buchholz to return to Team Alpha Male.

“I would never go back to that gym,” Buchholz proclaimed. “What I did there, I was there for 10 years. I was the first UFC fighter to fight out of Alpha Male. The social media, I did all of that. I started it from scratch. I made the Team Alpha Male Instagram, I ran that and it was the biggest team Instagram in the sport. . . The logo on all their shirts, I designed that logo. I was a huge part of that and I didn’t think that I ever, ever leave that. I thought that I was gonna die as head coach of Alpha Male but c’est la vie. Things don’t always work out the way you think they are and sometimes they turn out better for you.

“For me to ever coach Alpha Male again, that door is closed. Urijah would have to lick my boot if he wanted me to go back in that gym and even then I don’t think I’d do it.”

What do you make of the growing rift between Justin Buchholz and Urijah Faber?