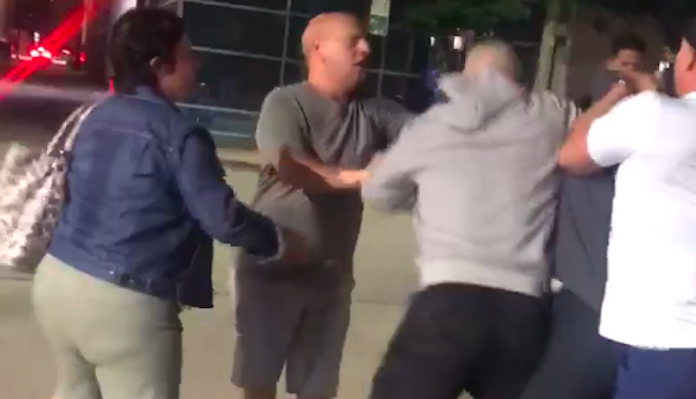 UFC lightweight Jared Gordon was having a nice night with his family in Chicago — until he was accosted by a stranger wielding a baseball bat.

It all started with an “I ❤️ Crack Whores” bumper sticker.

Gordon says he saw this bumper sticker, and attempted to take a video of it for his Instagram story. At that point, the driver of the car emerged, wielding a baseball bat, and threatening Gordon and his family. So Gordon took action.

See a video of this incident below.

Here’s how Jared Gordon described the incident on his official Instagram.

“I had an awesome time last night with my parents, cousin and her husband here in #Chicago until this happened. As we were walking back to the hotel I saw a car with a bumper sticker that said “I love crack whores”…so I stopped to do a IG story, seen in second video, and the guy gets out of the car and gets a bat out of his trunk and runs up to me and my cousins husband. We subdue him, it took everything in me not to hit him. But I do step on his neck and he goes to sleep for about 2-3 seconds… fun night in the windy city!” – Jared Gordon on Instagram.

This is not the first time Jared Gordon has had to get physical with a stranger. He also famously mangled his hand in a street fight in 2017.

“Of course we hit into the f*cking storefront window and it comes crashing down on me and cuts my hand wide open, my fingers,” Gordon told MMA Fighting of this 2017 street fight. “Luck of the draw for me, as always. I got 21 stitches.”

Gordon last fought — inside the cage — in June, when he defeated Dan Moret by unanimous decision. This victory separated him from back-to-back losses to Joaquim Silva and Carlos Diego Ferreira. He’s a solid 15-3 overall.