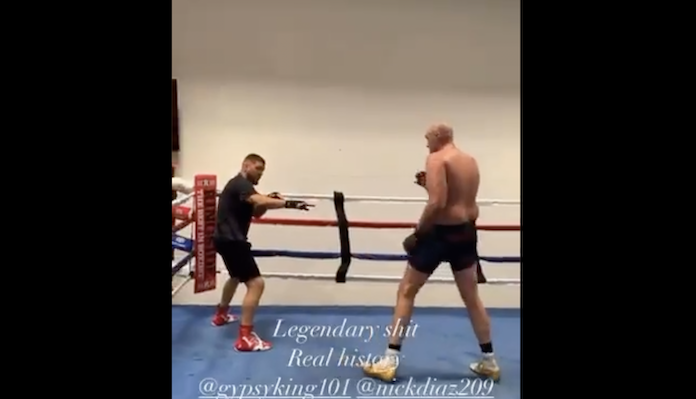 UFC legend Nick Diaz shared footage of him training with heavyweight boxer Tyson Fury ahead of a potential comeback in mixed martial arts.

Diaz was a guest at UFC 261 last month in Jacksonville, Florida, and he told UFC president Dana White that he wants to fight again. The last time we saw Diaz step into the Octagon was way back in January 2015 when he fought to a No Contest against Anderson Silva. In the six-plus years since then, there have been whispers of Diaz making a return to the Octagon, but it hasn’t happened up until this point. However, he appears to be serious about making a comeback this time, and he has been getting in some top-notch training.

Taking to his social media on Friday afternoon, Diaz posted a video of him doing some training in the boxing ring with Fury, arguably the best heavyweight boxer on the planet.

Nick Diaz is getting in some work with Tyson Fury 👀 pic.twitter.com/LUs9HLx19w

Diaz has been posting more videos of him doing training lately, so it appears as though he is quite serious about a comeback this time around. Considering he is 37 years old, there is certainly a good possibility that Diaz can return to the cage and still win some fights. However, when asked about a Diaz comeback recently, White said he wasn’t so sure.

“(The meeting) went good. My whole thing with Nick Diaz is that I just question how bad he really wants to fight. We got together, we had a great conversation, and talked about a possible comeback for him. I just don’t know. We’ll see how it plays out this summer and the rest of the year,” White said.

In the meantime, while White decides if Diaz is ready to fight again, “The Stockton Bad Boy” will continue training and spending some time getting to be in the ring with Fury.

What do you think about Nick Diaz doing some training with Tyson Fury?