On December 29, in the co-main event of UFC 232, dominant UFC women’s featherweight champion Cris Cyborg is expected to defend her title against women’s bantamweight champ Amanda Nunes — that is, if a recent fall hasn’t derailed that plan.

Fans on Twitter were quick to point out that this video could be old, but the ever reliable gif jockey Zombie Prophet, who found the footage, assures it’s brand new.

Assuming this fall didn’t cause Cris Cyborg any injuries — which is not certain at this point — it sounds like she’s heading into her UFC 232 title fight with Amanda Nunes in the best shape of her life.

“It has been a great camp,” Cyborg recently told BJPENN.com’s Cole Shelton. “We have brought in a couple of girls who have fought Nunes. I have gone to train at CSA in addition to my usual coaches of Cobrinha (Rubens Charles Maciel) and Jason Parillo. This camp we brought back Don Madge and added in Kenny Johnson for my wrestling as well. I feel confident that I’m well prepared.

“I will fight my style, I will not wait for her and I will be the pressure,” she added. “I have spent a lot of time focusing on my cardio. This fight is five rounds of five minutes and I will have the cardio to use the gas whenever I need to.”

Cris Cyborg has not lost a mixed martial arts bout since her pro debut, well over a decade ago. She’s 20-1 overall. Hopefully she’s alright and this tumble — if it’s indeed recent — doesn’t cause any issues.

Update: Cyborg training partner Don Madge recently Tweeted something that implies somebody he’s affiliated with has sustained an injury.

Speaking on her Instagram story on Friday morning, Cris Cyborg discussed her walkout music for UFC 232, which would certainly seem to imply the fight is still on. 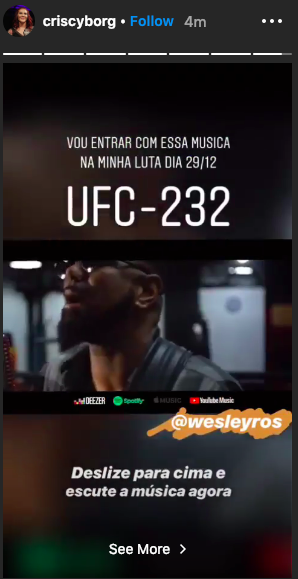