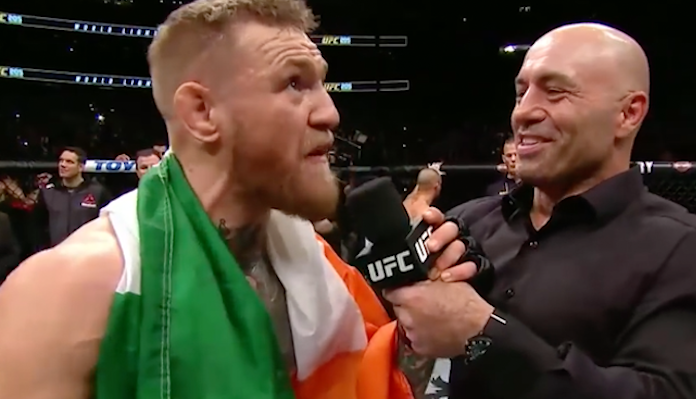 Joe Rogan has one of the biggest platforms in the podcast industry for both fight fans and non-fight fans, but former UFC champion Conor McGregor doesn’t seem to be a huge fan of his fight commentary.

During a Q&A session in Chicago, which was attended and filmed by BJPenn.com’s Mike Pendleton, McGregor was asked about potentially being a guest on Rogan’s podcast and said he’d be willing to do it but then went on to add that he wishes Rogan would call a fight the right way.

“He’s a great man, he’s got a great following, he’s got crazy insight, gets great guests, maybe at some stage of the game I’ll be on his podcast, who knows,” McGregor said. “I’d like him to call a fight how he sees it correctly, instead of reading off a script though.”

“The Diaz rematch it was like he was reading a script from the first fight and that last one [against Khabib Nurmagomedov], he was talking about my face was being smashed in,” he added. “I left that Octagon with a black eye, the same way his two rat cousins left with. His brother and his cousin left the Octagon with a black eye, so what is he [Rogan] talking about? But maybe one day I’ll be a guest on his podcast.”

Following his loss to Nurmagomedov, McGregor’s head coach John Kavanagh was a guest on Rogan’s podcast and talked about everything from went wrong in the fight to the lead-up to the fight. Fans have long waited for Conor McGregor to be a guest on The Joe Rogan Experience, also known as JRE MMA show when he talks to fighters.

Do you think we’ll see “The Notorious” sitting across from Rogan one day?