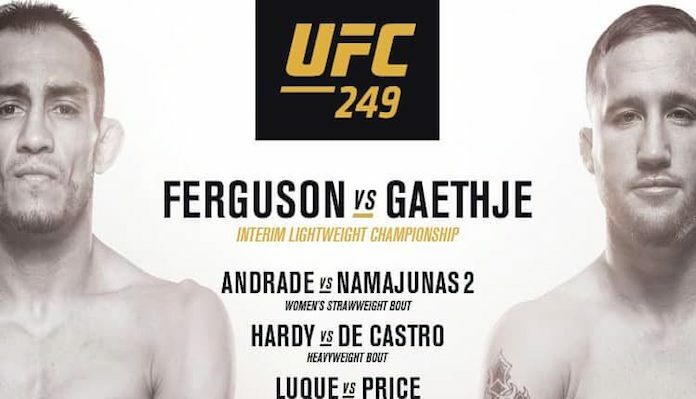 Dana White has remained adamant he wants all UFC events to go on as planned beginning April 18 at UFC 249. It now appears USADA will also be testing fighters on the card.

USADA had originally released a statement on March 17 saying they would only test fighters as deemed fit. But, the USADA director of communications has now provided a statement to ESPN’s Marc Raimondi. As of right now, they say they will do everything in their power to test UFC 249 fighters.

I asked USADA about drug testing for UFC 249. Here is the statement from director of communications Adam Woullard: pic.twitter.com/Ta7yuQwmsA

“With all consideration to athlete safety and logistical challenges, we’re going to do everything in our power to conduct event testing. Just like the referees in the octagon, our doping control officers are an essential part of a fair fight,” the statement read.

It is no doubt an important part of UFC events to have fighters tested for any performance-enhancing drugs. Although USADA says they will do everything in their power to test fighters, how many tests or what that will look like is unknown at this time.

Currently, UFC 249 is expected to take place on Tribal Land in California at the Tachi Palace Resort Casino. The event will be headlined by an interim lightweight title fight between Tony Ferguson and Justin Gaethje. The card also features the likes of Francis Ngannou vs. Jairzinho Rozenstruik and Vicente Luque vs. Niko Price among others.

Ferguson is entering this fight on a 12-fight winning streak and is looking to be a two-time interim lightweight champion. Last time out he TKO’d Donald Cerrone back at UFC 238.

Justin Gaethje, meanwhile, is riding a three-fight winning streak. There he beat Cerrone, Edson Barboza, and James Vick all by first-round knockout. This will be the first time “The Highlight” fights for a UFC title.

What do you make of USADA saying they will do “everything in our power to conduct event testing” for UFC 249? Sound off in the comment section, PENN Nation!