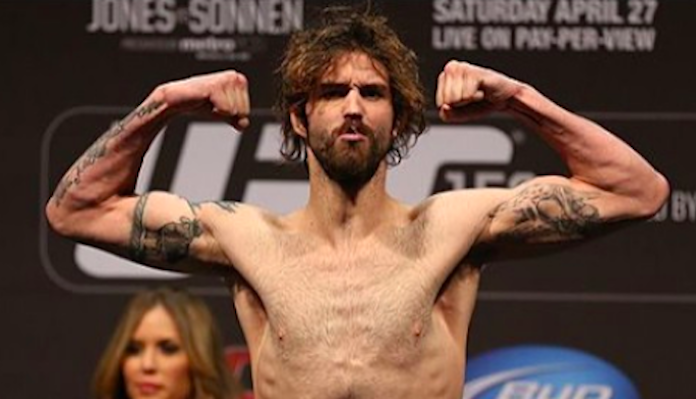 McKenzie did not appear at the commission’s hearing, which likely didn’t help his case.

A Nevada State Attorney General detailed the complaint against the former UFC fighter.

Here’s the story (via MMAjunkie):

“On Sept. 14, 2018, prior to his contest [with JD Domengeaux at Tuff-N-Uff: Fight Night] at the Orleans Hotel, he was given a valid request by a commission representative to provide a urine sample before his bout, but the respondent, Mr. McKenzie, refused and declared that he was going to go to his room and would not provide a sample until it was closer to his bout. When the respondent did return and provide a sample, the sample itself registered as abnormally high – in temperature, that is. When he was confronted about this, he made several representations including that if ‘this’ got out, he would lose his job, as well as an admission that he had smoked pot that day.

“When the respondent was asked if he had anything hidden on his person, had at first denied it, but upon further questioning, he ultimately relinquished from his clothing a bottle of urine substitute. This bottle, which he had concealed on his person, in his clothing, was capped with a nozzle that would let its liquid contents be streamed from it. The bottle, itself, contained a warm, yellow-tinted liquid that match the false contents of the sample he provided. Additionally, the bottle had a hand-warmer attached to it by a rubber band. This conduct by the respondent is not only an anti-doping violation, but it also violated other regulations that govern the commission.”

McKenzie will also have to pay a fee of $944.84 if he ever hopes to be licensed in Nevada again, per MMAjunkie.

This suspension is especially significant because other state commissions tend to follow the lead of the NSAC, meaning McKenzie’s days of fighting on North American soil are likely over for the next four years.

As MMA-Today’s Al Zullino points out, Cody McKenzie is als currently facing discipline in Italy for a similar issue.

He's already facing a two-year suspension in Italy due to refusing to provide a sample ahead of his match in Venator against former Cage Warriors champ Stefano Paternò. https://t.co/LLq1z2KDWP

Cody McKenzie his currently on a two-fight skid, having recently been defeated by Stefano Paternò and Joe Riggs. His last win occurred in 2016, when he defeated Stefano Valeriu Mircea by guillotine — the submission he became known for during his time on The Ultimate Fighter. He’s currently 16-11 overall.

What do you think the future holds for Cody McKenzie after this lengthy USADA suspension was issued?