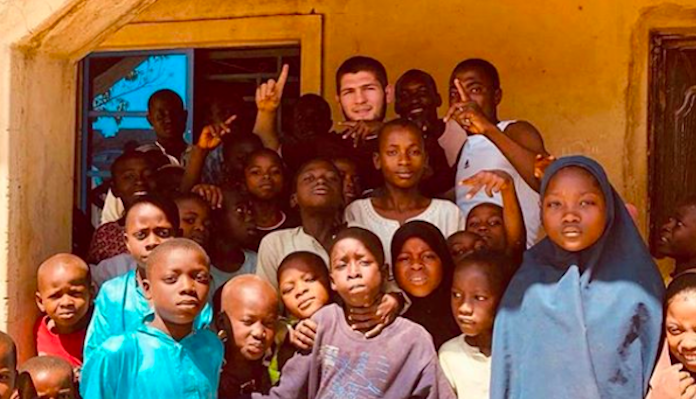 Just over a month removed from his massive submission defeat of former UFC lightweight and featherweight champ Conor McGregor, undefeated UFC lightweight kingpin Khabib Nurmagomedov headed to Nigeria. The purpose of his visit, per a post on the UFC’s official Instagram post, is to “help build medical facilities and fix water wells around the area.”

Speaking on his own Instagram page, the lightweight champion Khabib Nurmagomedov gave a bit more information on this visit to Nigeria. He says the trip is the realization of a ‘childhood dream,’ and that there are more projects in the country underway.

It was my childhood dream and I was praying God to give an opportunity to help people in Africa.
Alhamdulillah he responded to my Dua’s 🤲
InshaLlah I’m going to come back here in 4 months to launch few projects that we already targeted.
May God 🤲 make our intentions sincere and by his mercy lead us to heaven. – Khabib Nurmagomedov.

With his defeat of Conor McGregor, Khabib Nurmagomedov improved to a flawless 27-0 overall. Other highlights of his record include lopsided defeats of top flight foes in Edson Barboza, Michael Johnson and Rafael dos Anjos.

While the UFC lightweight champion has recently been linked to bouts with undefeated boxer Floyd Mayweather, former UFC welterweight middleweight champ Georges St-Pierre, and former ONE and Bellator welterweight champ Ben Askren, it’s sounding increasingly likely like his next fight will be a long-awaited battle with Tony Ferguson.

Nurmagomedov and Ferguson have been scheduled to fight a whopping four times previously to no avail. Despite these many hiccups, it sounds like UFC President Dana White is ready to try the matchup again.

“As a fight fan, you’ve got to go with Tony,” White told ESPN last month. “Tony had the belt, tweaked his knee, got stripped, this fight happens — Tony never lost the [interim] belt in a fight. Neither did Conor, but Conor got the opportunity to actually fight. I think Tony deserves the next shot.”

What do you think of Khabib Nurmagomedov’s volunteer efforts in Nigeria?