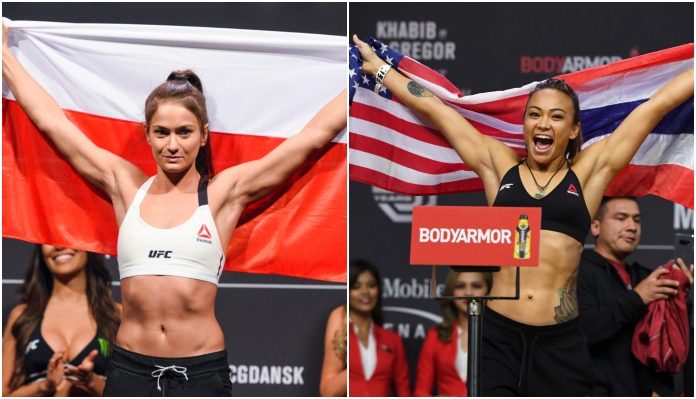 Karolina Kowalkiewicz enters the octagon for the first time since suffering a devastating knockout loss to Jessica Andrade at UFC 228.

Prior to the setback, the former strawweight title challenger had reeled off a pair of wins over Jodie Esquibel and Felice Herrig.

As for Michelle Waterson, the former Invicta Atomweight champion is coming off back-to-back decision victories over opponents Cortney Casey and Felice Herrig.

Round two begins and the ladies engage quickly. Karolina Kowalkiewicz lands a nice right hand. Michelle Waterson fires back with a low kick that buckles the knee of Karolina. Nonetheless, Kowalkiewicz continues to press forward. She lands a nice right hand. Waterson smiles but that got her attention. Michelle with a nice inside low kick. She lands another. Karolina is looking to close the distance. She gets the clinch but Waterson uses a judo trip to take the fight to the floor. Waterson working from side control now. She lands a nice elbow. Karolina attempts a reverse triangle but Michelle is wise to it and escapes back to side control. Just over ninety seconds remain in round two. Waterson is looking to isolate an arm. She gives up on that and lands another hard elbow. One minute remains. Waterson goes for an armbar and it is tight. Somehow Karolina survives and scrambles free. She must have a rubber arm. That was ridiculous. The horn sounds to end round two.

Round three begins and Karolina Kowalkiewicz was told by her corner that she likely needs a finish to win this fight. She immediately comes out with pressure but Waterson does a good job of keeping her at bay with a side kick. The ladies clinch and Waterson looks for another trip takedown. This time Karolina defends. Kowalkiewicz with a body shot now. Waterson circles and attempts a high kick. It is not there. Karolina presses “The Karate Hottie” against the cage and works some knees. Michelle Waterson replies with a pair of nice knees and then switches the position. More knees from Waterson. She breaks free from the clinch. Michelle circles and then shoots in and scores a single leg takedown. She begins working from the full guard of Kowalkiewicz. A couple of shots and Waterson decides to stand back up. The fighters immediately clinch and exchange shots. Waterson breaks free and lands a right hand. She misses with a spinning kick. Karolina lands a jab. Another body kick from Waterson. The horn sounds to end round three.