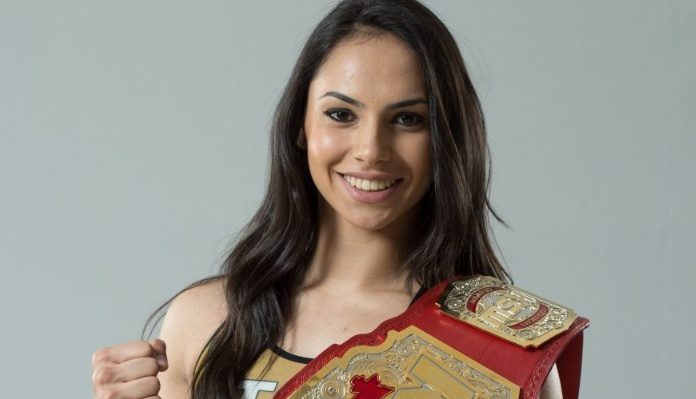 The bonus awards have been handed out for UFC Fight Island 2, and Ariane Lipski won $50,000 for her incredible kneebar submission win over Luana Carolina.

The women’s flyweight contender Lipski was one of four fighters who earned the coveted $50,000 bonuses following the event. In addition to Lipski, new UFC men’s flyweight champion Deiveson Figueiredo won a bonus for his insane first-round stoppage win over Joseph Benavidez. As well, lightweights Rafael Fiziev and Marc Diakiese won $50,000 each for “Fight of the Night” for their incredible striking battle on the main card.

The UFC announced the four bonus winners — Lipski, Figueiredo, Fiziev, and Diakiese — following the event. Check them out below.

These two finishes deserve something extra!

The UFC brass had to make tough decisions as there were a number of fantastic finishes that didn’t get bonuses since only four were handed out. As it was, the four fighters who earned their bonuses were all well-deserving of taking home the extra paychecks.

For Ariane Lipski, the kneebar win over Carolina was one of the most vicious submissions we have ever seen in women’s MMA. Lipski began her UFC career 0-2 but she has since gone 2-0 to pull to an even .500 record inside the Octagon. She really needed a win like this because it showed the fans and the UFC why she was signed in the first place. The former KSW star made Carolina scream in pain by picking up the nasty kneebar finish.

As for Deiveison Figueiredo, he obviously deserved a bonus for his first-round drubbing over Joseph Benavidez. Figueiredo scored three knockdowns in the first round plus had three near-finish attempts with his submissions before finally choking Benavidez out cold with one of the most devastating rear-naked chokes we have ever seen in the UFC.

Finally, Rafael Fiziev and Marc Diakese reach earned bonuses for their amazing striking battle on the main card that saw Fiziev emerge as the winner via decision after both men were toe-to-toe for 15 minutes. It was a really fun, entertaining battle between two men who are high-level strikers.

Since the UFC awarded a “Fight of the Night” award, several fighters who earned finishes on the undercard did not get a bonus. In particular, middleweight contender Jack Hermansson didn’t get anything for his heel hook submission over Kelvin Gastelum in the co-main event and Joel Alvarez didn’t get a bonus for his submission over Joe Duffy.

Do you think the UFC Fight Island 2 bonus winners were correct?