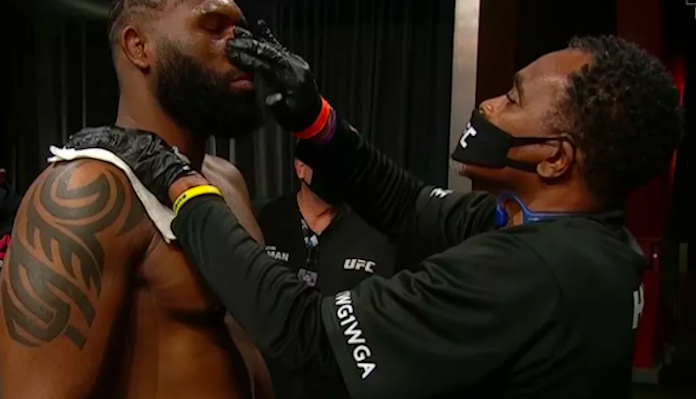 A UFC cutman is under investigation for wearing a pair of QAnon patches on the broadcast for last weekend’s UFC on ESPN 11 broadcast.

For those unfamiliar, QAnon is a far-right group that pushes a conspiracy about “a supposed secret plot by an alleged ‘deep state’ against Donald Trump and his supporters,” per Wikipedia.

The patches were donned by cutman Don House, and were visible at several points on the UFC broadcast. As Karim Zidan of Bloody Elbow explains, “The cutman sported a ‘Q’ logo on the front of his shirt and a WWG1WGA logo on the left arm of his shirt, the latter of which stands for ‘Where we go one we go all’ and is used exclusively by QAnon supporters.”

House’s decision to wear these QAnon patches was a violation of UFC policy, and the ordeal has prompted an official investigation by the promotion.

“This was a violation of our staff event outfitting policy and the matter will be thoroughly investigated,” the UFC said in a statement to ESPN.

Speaking to MMA Fighting, House downplayed his interest in the conspiracies pushed by the shadowy organization, and claimed he only likes the WWG1WGA slogan.

“All the conspiracy, all the stuff they say about the group, I’ve got nothing to do with that,” House said, addressing this QAnon scandal. “I just like the message: Where we go one, we go all.”

“I always read this stuff where they say this is a spiritual group,” House added. “Some say they’re a part of child trafficking. No. They’re the complete opposite of that. They’re trying to expose that.”

“My message is simple. It’s not about I signed up for a club that wants to overthrow the government. I’m not a part of that nonsense. But I do like the message where it talks about everyone being as one in the United States, and the planet, for that matter. That’s my message.”

House admitted that he regrets wearing the QAnon patches in question.

“If I’d known I’d get this much flack, I would have never worn the thing, to be honest with you. People’s belief is their personal belief. That was mine. I was just showing that I really love the message, especially in this day and time with all the crap that’s going on. Did you see the NASCAR guy’s locker room? You notice how everybody got together for that one person? Everybody got together for him, and I thought, that’s what America needs. To me, that’s the message, ‘Where We Go One, We Go All’ is to me, where we all have to stand up for everybody. We’re Americans. This country is built for everybody.

“That’s the message that I’ll always live with, and I thought it would look great on my sleeve. I didn’t know it would cause this much controversy. Do I regret it? Yeah, I do, the embarrassment for the UFC and to Dana, because he is a friend of mine. But do I believe that we as Americans should be one? I will until the day I die.”

What do you think of Don House’s decision to wear QAnon patches on last weekend’s UFC broadcast?