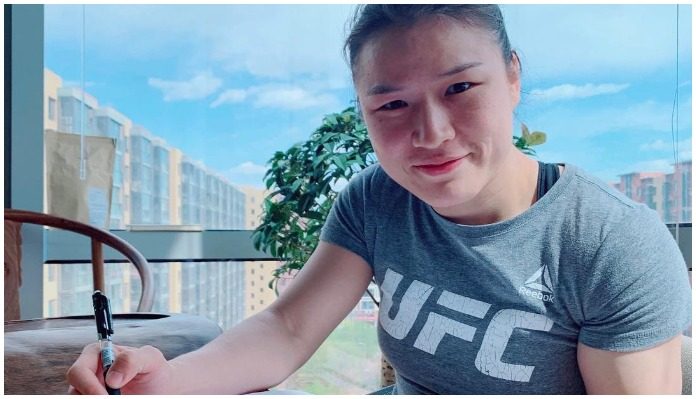 One of the UFC’s fastest rising strawweight isn’t going anywhere any time soon. Currently ranked #7, China’s Weili Zhang (19-1) has signed a new multi-fight deal with the UFC, per her manager Brian Butler-Au.

BJPenn.com’s Drake Riggs has since learned the deal is for six-fights.

The first Chinese fighter to ever appear in the UFC’s rankings, Zhang is making a push to become the first Asian UFC champion.

The first Chinese fighter to ever appear in the UFC’s rankings, Zhang is making a push to become the first Asian UFC champion.

Having not lost a fight since her pro debut in 2013, Zhang has won 19 straight bouts including three in the UFC. After defeating Danielle Taylor in her UFC, Zhang ran through former WSOF champion Jessica Aguilar in her sophomore UFC appearance.

The starching of Aguilar set Zhang up for a big test in the form of Tecia Torres. The two 115-pounders squared off on the PPV portion of UFC 235 in March, with Zhang walking away victorious.

The three-round decision victory over Torres has set Zhang up for a marquee matchup in her next bout. With the UFC reportedly returning to China in August, Weili Zhang would be an ideal candidate for a high profile matchup on the card.