UFC commentator Daniel Cormier gives update on Cain Velasquez after posting bail: “I’m just happy for him to be back”

UFC commentator Daniel Cormier has given an update on Cain Velasquez.

The former UFC heavyweight champion has been embroiled in legal issues since February. Velasquez was arrested and later charged with attempted murder, among other charges. He allegedly chased Harry Goularte Jr. through traffic and fired his handgun at him. Instead of hitting that individual, he hit the man’s stepfather.

The arrest shocked fans, as the Mexican fighter has always been a quiet and stoic figure. However, the news would later reveal that Goularte Jr. had recently been arrested for child sexual abuse acts involving Velasquez’s son. He had recently been released from custody just prior to the shooting.

For months, Cain Velasquez has sat in jail and was repeatedly denied bail, unlike Goularte Jr.. The judge in the case stated that he was a threat to the public and had a “reckless disregard for human life”. After several appeals, he was released on a $1 million dollar bond earlier this week.

The news was a relief to the MMA community, but few were happier than Daniel Cormier. The UFC commentator has been close friends with Velasquez for years and wrote a letter of support during his imprisonment.

Since posting bail, the former champion has been quiet. However, Cormier has provided a brief update on how Velasquez is doing now at home. On The MMA Hour, the commentator stated that his friend is finally home, and has been cherishing his time with his children. 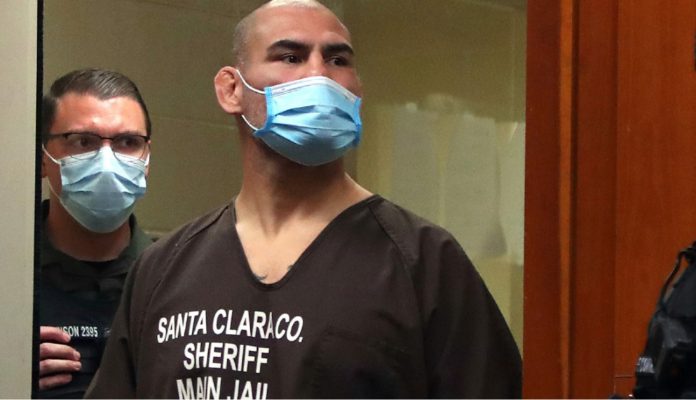 “We FaceTimed a little bit this morning,” Cormier told Ariel Helwani on The MMA Hour. “That’s my boy. I’m so happy. He’s home, laying on the couch with his kid, playing. I can’t wait to go home and see him. I’m happy for that man.” (h/t MMAFighting)

“He’s happy, because there were some times where he and I sat and we visited, and we’re just talking about life and what his life became in there. You’ve got to start to adjust. I think one of the most telling things that Cain told me when we were in there, he goes, ‘As I sit here and I’m eating this food and I’m taking stuff from the commissary and I’m trying to live, I think back to my pantry and I can’t imagine I can have any of this, whenever I want it.’

He concluded “We’re talking about pantries. Something you probably walk past every day in your house and take for granted, don’t even close the door on the pantry. He’s just like, ‘I can’t believe that when I was living [on the outside] I could have whatever I wanted, anytime I wanted, and it’s so much.’ Because it was so limited in there. So I’m just happy for him to be back.”

This article appeared first on BJPENN.COM
Previous articleAlex Pereira says Israel Adesanya would deserve an immediate rematch after UFC 281, but claims “he isn’t going to want it”
Next articleDustin Poirier announces partnership with UFC to promote his Louisiana-style hot sauce: “It means a lot”
© Newspaper WordPress Theme by TagDiv