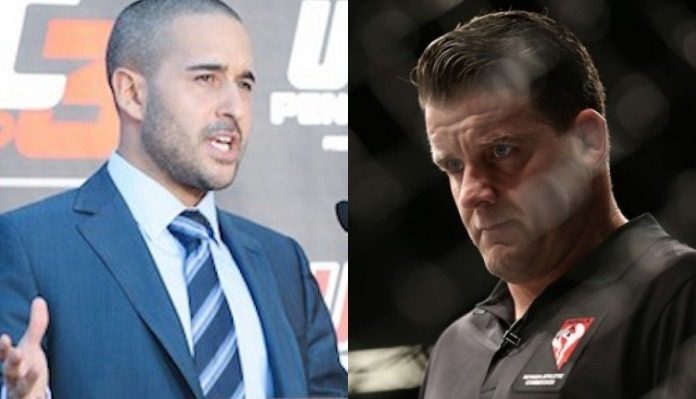 On Saturday night, in the co-main event of UFC 235, Kamaru Usman authored a dominant decision victory over long-time UFC welterweight champ Tyron Woodley. During the fight referee Marc Goddard continually stood Usman and Woodley up, oftentimes when some onlookers felt it wasn’t necessary. UFC commentator Jon Anik, who was on duty for the card, shares that opinion.

“Wildly inconsistent,” Anik said in response to a fan who questioned the varying actions of MMA referees. “And Usman was working his ass off.”

It did not take long for Marc Goddard to respond to this comment, who took the opportunity to criticize Jon Anik and his broadcast partners for their commentary.

“The only thing wildly inconsistent is your and your co-comms recollection and observation of ACTUAL events,” Goddard wrote. “I’ll save my side for later.”

From there, Jon Anik issued another comment, accusing Goddard of “arrogance.”

“I always try to be respectful,” Anik wrote. “We are just calling it like we see it, too. But there is an arrogance with which you deal with the fighters, commentators and many in this sport. And I find it off-putting. One man’s take. And I’m quite sure you’ll give yours for everyone to hear.”

Anik then responded to another fan, explaining that he only meant there is an inconsistency in the way referees handle stand-ups.

“Exactly,” he wrote. “That is what I was referring to…that two of the consensus best referees in the game would handle those two situations so differently. I understand the athletes are different but there are parallels to be drawn.”

What do you think of this back-and-forth between Jon Anik and Marc Goddard. What were your thoughts on the refereeing and commentary at UFC 235?