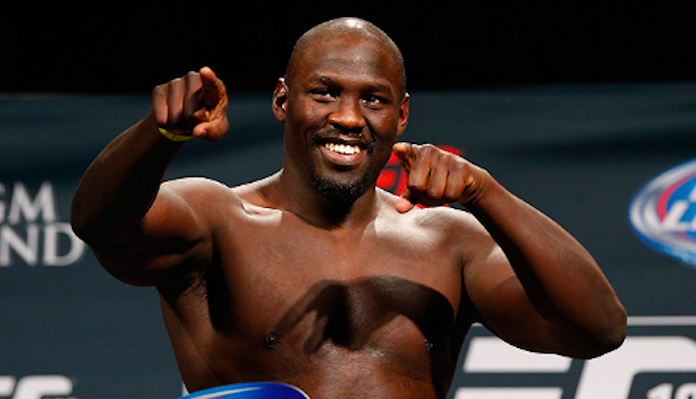 David Branch enters tonight’s bout on the heels of a spectacular knockout finish of Thiago Santos which took place in April.

Meanwhile, Jared Cannonier will be looking to rebound, this after suffering a knockout loss to Dominick Reyes in his most recent octagon appearance.

Round one of this UFC 230 contest begins and Branch fires off a low kick. Cannonier quickly answers with one of his own. Branch shoots in and scores an early takedown. The former World Series of Fighting attempt looks to take Jared’s back. Cannonier avoids giving up the position and gets back to his feet. He fires off a shot to the body of Branch. David fires back with a pair of crisp jabs up the middle. He shoots in and presses Jared against the fence. Branch lifts Cannonier up and slams him to the floor. Branch immediately moves to take back position. Jared is trying to defend but is eating shots while doing so. Good left hands from Branch now. Cannonier scrambles and gets back up to his feet. The fighters break and Jared misses with a wild hook. Branch circles out and then comes forward with an overhand right. Branch with a left hook that misses the mark. He shoots in for a takedown but this time Jared is able to defend. This UFC 230 fight is off to a fast start. Branch shoots in and presses Jared against the cage. He scores a trip takedown but Cannonier gets right back up to his feet. Jared comes forward with some big shots now. Branch shakes his finger as if to say no. The horn sounds to end the opening round of action.

Cannonier landing as the round comes to a close!#UFC230 pic.twitter.com/iLU4P3lvKf

Round two begins and this UFC 230 middleweight fight is back underway. Cannonier comes forward with a pair of big punches. He lands a left hand that drops Branch. David covers up as Jared rushes in and begins landing ground and pound. These are some big punches. The referee is taking a close look. Branch continues to eat ground and pound strikes from Cannonier. The referee has seen enough and calls a stop to the fight.

Cannonier finishes Branch in round 2! What a statement for @KillaGorillaMMA! #UFC230 pic.twitter.com/c0i0p2cz0w