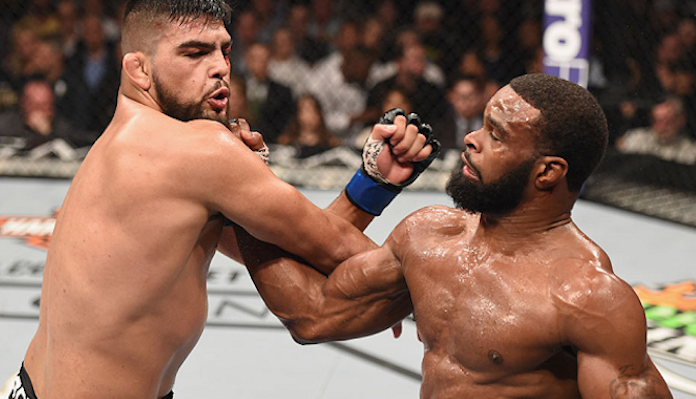 In a recent appearance on TMZ’s Hollywood Beatdown, Tyron Woodley tore into Gastelum for the comments he made about Woodley during the Dominance MMA media tour in Los Angeles. Woodley was not happy that Gastelum called him out for a rematch, and “The Chosen One” ripped into him on TMZ.

Check out what Tyron Woodley said below.

“Kelvin Fatselum, the one who fought me at middleweight when I was a welterweight, and got his ass whooped when I broke my foot, and I gave him his money back and now he’s talking sh*t three years later,” Woodley said. “F*ck everybody around his team from top to bottom.”

Tyron Woodley defeated Gastelum by split decision back at UFC 183 in January 2015. Woodley was kind enough to offer Gastelum back the portion of his show money the commission took for missing weight even though he didn’t have to. Now Tyron Woodley isn’t happy that Gastelum is talking smack about him in October 2019.

In the meantime, Woodley is gunning for a boxing match with Canelo Alvarez. Until then, we will wait to see how Gastelum responds to these comments.

Are you interested in a rematch between Tyron Woodley and Kelvin Gastelum?