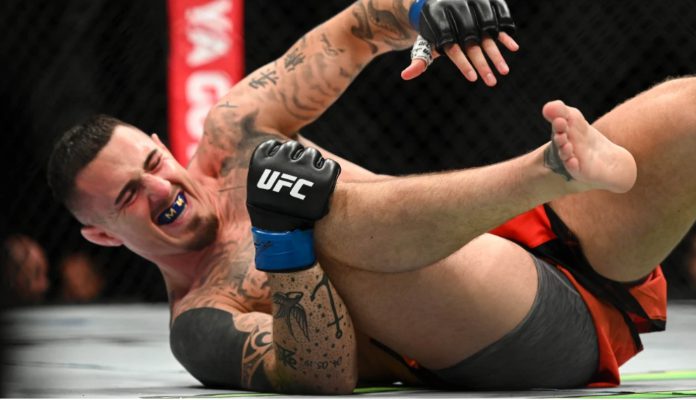 Tom Aspinall will be having surgery on his knee next week.

Aspinall was headlining UFC London last Saturday against Curtis Blaydes in what was a big step-up in competition for the Brit. Although Blaydes has been around the top-five for years, it was Aspinall as the betting favorite heading into the fight. Unfortunately, just 15 seconds into the contest, the Brit went down in pain as it appeared his knee blew out.

Now, Tom Aspinall took to Twitter to give an update to his fans where he admitted he has been down in the dumps. He also says he will be having surgery next week once the swelling goes down.

“Hello everybody. Just a quick update on the knee situation, because plenty of people are asking about the diagnosis and what happened to the knee. Now anybody who’s got knee problems knows that in order to have an MRI scan, an accurate MRI scan, you need to let the swelling go down,” Aspinall said. “So I spoke to the surgeon, we have a rough idea of what it is, but we are currently waiting for the swelling to go down, and I will be having the MRI scan this weekend and having surgery early next week in London. So I just want to say a massive thank you to everyone who’s reached out. Obviously I’ve been offline, been down in the dumps since Saturday night, but hopefully we’ll get it fixed, get surgery early next week. Thank you.”

Tom Aspinall (12-3) suffered the knee injury last time out to Curtis Blaydes which resulted in a TKO loss. Prior to that, he was on an eight-fight win streak including starting his UFC tenure going 5-0 with wins over Alexander Volkov, Serghei Spivac, Andrei Arlovski, Alan Baudot, and Jake Collier.

Who would you like to see Tom Aspinall fight once he is healthy?