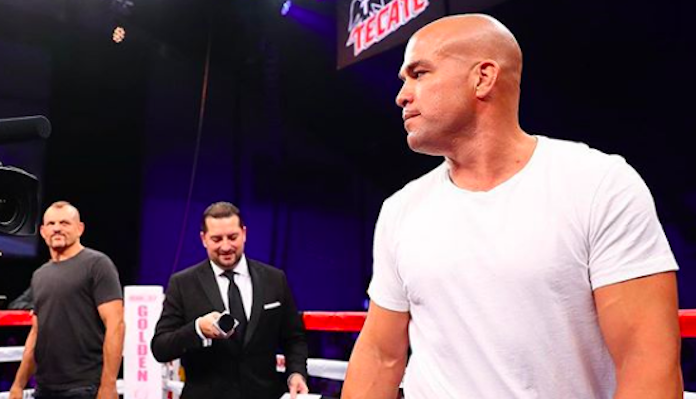 Ortiz, an outspoken conservative, has been weighing in on many controversial subjects on social media recently.

On one of Ortiz’s recent Instagram posts, which criticized US presidential hopeful Joe Biden, a fan suggested the former UFC champ should “run for some kind of public office in California.”

Ortiz responded by announcing that he’s “thinking about it.”

Tito Ortiz is “thinking” about running for public office in California. pic.twitter.com/vM5SxunkJW

“I’m going to be a police officer,” Ortiz wrote in the replies to another recent Instagram post. “I can help bring respect back to officers. We should be treat each other how we want to be treated.”

Speaking to TMZ Sports shortly thereafter, Ortiz doubled down on these plans. He says he’s yet to decide if he’s going to be a sheriff or a police officer—perhaps not realizing that neither of these are positions civilians can simply walk into—but that he intends to get into law enforcement when his MMA career concludes.

“I plan on it,” Ortiz said about becoming a place officer (h/t MMA Mania). “It just depends on what ranking I want to do. Do I want to be a sheriff or do I want to be a police officer? I haven’t really made my decision yet. I’m actually going to go to L.A. in the next few days and go do a ride-along with one of my friends. I’ll be fighting one more time this year. I want to hang ’em up, but, I want to do something else that will not just keep that excitement going but just do what’s right for the country. Do what’s right for the city, for my city.”

Given Ortiz’s ambitions for law enforcement and politics, it’s worth reminding that he recently denied that George Floyd was killed by police officers—and that’s hardly the first conspiracy theory he’s shared.

“All of the sudden when Biden said ‘If you ain’t vote for me you ain’t black,’” Ortiz said on social media recently. “What’s the best way to do it? Oh let’s go ahead and let a officer supposedly kill a black guy. You know he died from a heart condition right? It wasn’t suffocation. Crazy. It’s not right. I’m not saying it’s right. It’s completely wrong. The cop should have never did that. But the cop that got arrested looks nothing like the cop that did it. Crazy. The only reason I say this shit is because I speak the truth.”

Do you think Tito Ortiz would make a good politician or police officer?