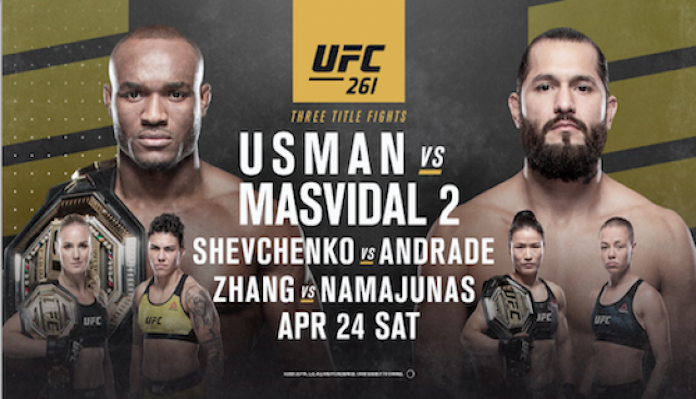 Ticket holders have warned that attending UFC 261 could result in severe and permanent damage to their health, according to the disclaimer.

The UFC will have fans back in the crowd for the first time in over a year when the promotion heads to Jacksonville, Florida on April 24 for UFC 261: Usman vs. Masvidal 2. The card is stacked with three title fights. In the main event, UFC welterweight champion Kamaru Usman puts his belt on the line for a second time when he faces rival Jorge Masvidal. The two met last summer on Fight Island, with Usman winning a unanimous decision in a short-notice fight. Nine months later and they are running the fight back.

In the UFC 261 co-main event, UFC women’s flyweight champion Valentine Shevchenko faces off against Jessica Andrade. And in the third title fight slated for the card, UFC women’s strawweight champion Weili Zhang defends her belt against Rose Namajunas. The card is stacked and it was no surprise that the event sold out, with tickets being completely gone after just a few minutes. It’s a huge event and it’s bigger because fans are allowed.

However, the UFC is making sure that any fans attending UFC 261 realize that there is a risk of being exposed to COVID-19. The promotion noted in its disclaimer on the fine print for UFC 261 tickets that exposure to COVID-19 could lead to serious health issues, including potential death. The UFC is taking a calculated risk by holding this event with a sold-out crowd despite the fact that the COVID-19 pandemic is still a very real thing. If you are attending UFC 261, make sure to read the fine print (h/t MMA Mania).

Hopefully, everyone who attends the event stays safe, but there are real risks involved.

Are you one of the ticket holders who will be attending UFC 261 in Jacksonville?