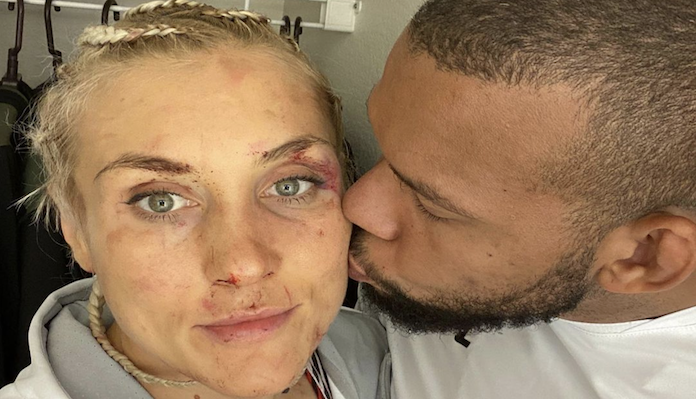 UFC light heavyweight contender Thiago Santos reacted after his fiancée Yana Kunitskaya got knocked out by Irene Aldana at UFC 264.

Santos and Kunitskaya have been dating for several years and have been engaged since last Christmas. They both train together at American Top Team in Coconut Creek, Florida, and both are top-10 ranked fighters in the UFC. On Saturday night at UFC 264, Santos was in Kunitskaya’s corner as he always is when she suffered a tough first-round knockout loss to Aldana. Although Kunitskaya closed as the slight favorite to win the fight, she got caught with a giant left hook in the first round and then got stopped with ground and pound. It was a tough loss for “Foxy” and it must not have been easy for Santos to watch it go down.

Taking to his social media following the fight, Santos reacted after seeing Kunitskaya get knocked out by Aldana. Check out what “The Sledgehammer” had to say about it below.

Thiago Santos: Today wasn’t our night, lose is part of our sport, part of life. We fought, we tried and we did our best. Congrats to Aldana, no excuses. @yanamma I am so proud of you, because I am with you 24 hours a day and I know how hard have you been working for, I love you so much and forever. Thanks to all who supported us.

Had Kunitskaya defeated Aldana, it’s possible that she would have been a potential title contender for UFC women’s bantamweight champion Amanda Nunes. But seeing her lose in such a devastating fashion will likely set Kunitskaya back in the title picture at women’s 135lbs, though she is still the No. 5 ranked fighter in the division at this time of writing. As for Santos, he returns to the Octagon this fall when he takes on Johnny Walker.