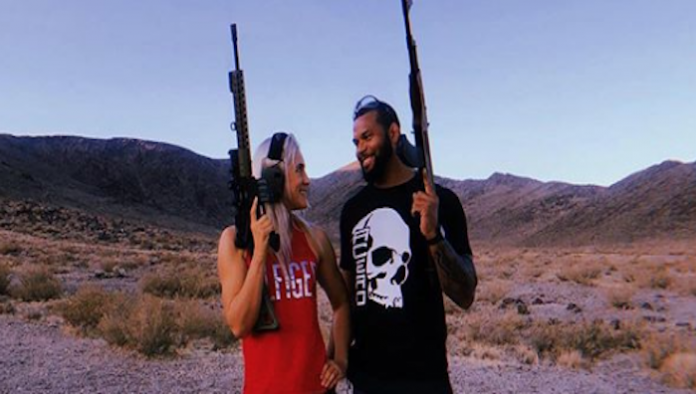 Santos pushed Jones to the brink of defeat but ultimately lost a split decision in one of the more controversial decisions of 2019. Even in defeat, though, Santos’ stock went through the roof and he has since called for a title shot against the UFC light heavyweight champion Jones. Unfortunately, Santos suffered horrible injuries to both his knees in the fight.

Santos had to have double knee surgery and is currently on the shelf until 2020. In an interview with Combate’s Evelyn Rodrigues, Santos says that he was considering retirement from MMA but credits his girlfriend, the UFC women’s bantamweight contender Kunitskaya, for helping keep him focused on staying the course of earning a rematch with Jones.

The two went public on Instagram this week with their relationship.

“Yana was very important here for me. After operating both knees, Tatá Duarte (my head coach) stayed here a week and had to leave. She was the one who took care of me. Good thing she’s a bantamweight, she’s strong. She carried me, put me in the wheelchair, pushed, put in the car, brought it to the UFC Institute, did it every day. I don’t know what it would have been like if it wasn’t for her. She helped me a lot. It helped me when I needed it most,” Santos said (via Google Translate).

Santos said in the interview that he is feeling better and recovering from his surgeries. He is currently in Las Vegas at the UFC P.I. helping Kunitskaya train for her upcoming fight against Aspen Ladd at UFC Washington, D.C., repaying his girlfriend for everything she did for him when he was hurt.

“When I returned to Brazil, after I was recovering and was able to walk, I promised her that I would return to Vegas to help her at her camp. And she said she was going to wait for me. I kept my promise, I came back, I’m here helping her. We are together, she is a very hard-working girl who wants you to help. She likes to learn, listens to you, accepts what you say, understands and is very dedicated. I have never seen a girl train as much as she does. Pleased to help,” Santos said.

Do you think Thiago Santos could beat Jon Jones in a rematch?