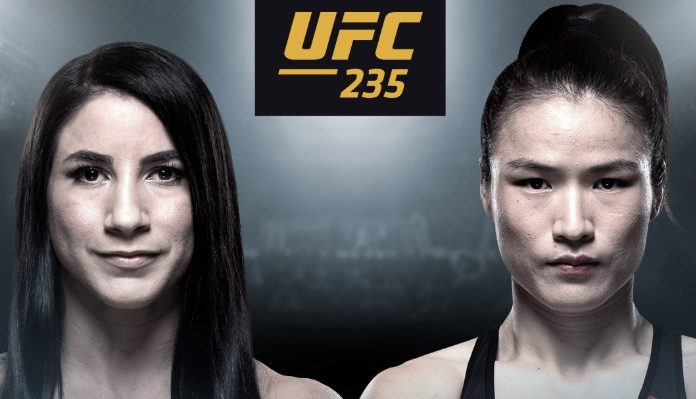 The UFC strawweight division is deeper and better than it’s ever been right now and leading the new wave of talent is China’s Weili Zhang (18-1).

Holding quite the impressive record of 18-1 in her 19 career bouts, Zhang’s lone loss came in her pro debut. Having not looked back since, Zhang has dominated her competition on route to 16 finishes (10 KO/TKOs, six submissions) and six titles in Kunlun Fight MMA.

Having just fought this past Saturday in her sophomore UFC appearance at UFC Beijing, Zhang made a very loud statement by dominating former worldwide No. 1 strawweight, Jessica Aguilar on route to a first-round armbar victory.

Now, Zhang already has her next bout lined up and it will be her biggest one yet.

Standing in her way will be the perennial top 10 contender, “The Tiny Tornado” Tecia Torres (10-3) as they’re set to meet at UFC 235 in Las Vegas, Nevada on March 2. The bout will be Zhang’s second in America after making her UFC debut at UFC 227 in Los Angeles, California.

Off to Las Vegas!@TeciaTorres meets the rising Weili Zhang at #UFC235! pic.twitter.com/UNYlbWHIxk

For the division staple in Tecia Torres, this will be her tenth bout inside the Octagon since joining the roster as part of the historic season 20 of The Ultimate Fighter which introduced the 115-pound weight class and crowned a champion.

Torres has gone 6-3 within the UFC but currently rides the first losing streak of her career after recent encounters with Jessica Andrade and former champion Joanna Jedrzejczyk. Torres’ last win came over Michelle Waterson at UFC 218 in December 2017.

UFC 235 is also set to be the highly anticipated return of both Nick Diaz and Jorge Masvidal as they square off in a welterweight bout. These two fights are the only two that have been announced for this card so far.