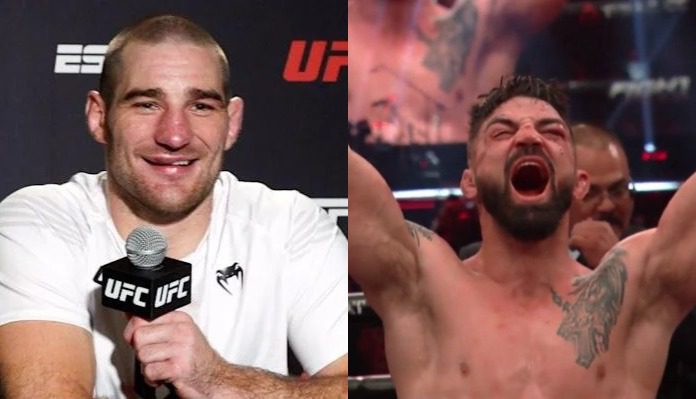 Sean Strickland has responded after being dubbed a “racist motherf**ker” by former UFC fighter Mike Perry.

Strickland (25-3 MMA) is currently preparing for his highly anticipated middleweight showdown with Alex Pereira at UFC 276. The winner of that fight should be in prime position to challenge for the 185lbs title their next time out.

While Sean Strickland will have his hands full with ‘Poatan’ come July 2nd, the 31-year-old will have to keep his eyes open for Mike Perry in the meantime. ‘Platinum’ recently took to social media where he issued the following warning to Strickland.

“Sean you racist mother f**ker. You coming to Florida to put hands on me? Its Sunday bro! The lord is resting. But this week I’m down for you to try and I’m going to put these hands on you. Let’s go Sean Strickland. Let’s go! Is that even your name? I don’t know. You might be Sean Sherk or one of these other UFC guys, you Nazi!”

Sean Strickland responded by sharing the video on his Instagram while captioning the footage with the following:

“Ahh man I was drinking but I’m looking forward to the rounds.” Perry said, insinuating that the two plan on sparring together in the near future.

‘Platinum’ recently hinted that he will be returning to action on June 24. However, nothing has been made official as of this time. Perry last competed back in February at BKFC KnuckleMania 2, where he picked up a decision victory over Julian Lane.

What do you think of the recent back and forth between Sean Strickland and Mike Perry? Share your thoughts in the comment section PENN Nation!