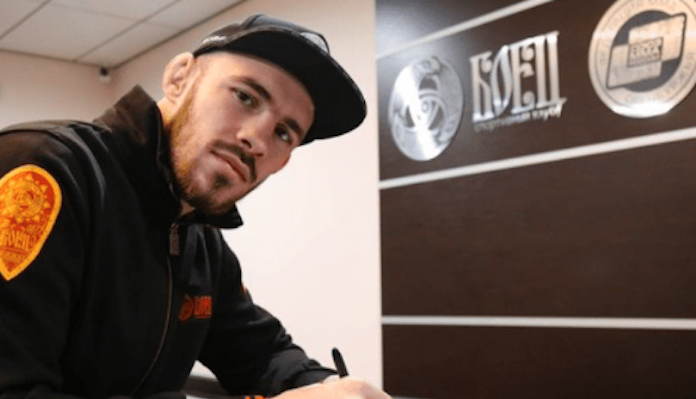 Roman Bogatov has been cut by the UFC after landing multiple fouls in a decision loss to Leonardo Santos at UFC 251 in Abu Dhabi last month.

Bogatov couldn’t seem to get out of his own way in the fight with Santos, landing a pair of groin shots and an illegal knee during the three-round contest. These repeated fouls earned him a two-point penalty courtesy of referee Marc Goddard, which led to a decision loss, and ultimately, his UFC release.

Bogatov confirmed that he’s parted ways with the promotion to Russian outlet TASS.

“Yes, they told me today they had terminated the contract,” Bogatov said, clarifying that he hadn’t been given a reason for his release.

His manager Sayat Abdrakhmanov subsequently told TASS that the fouls landed in his loss to Santos played a role in his release.

Roman Bogatov’s contract with the UFC has been terminated after one fight in which he hit his opponent with 3 or 4 illegal strikes.

After his victory over Bogatov, Santos commented on the foul-filled contest.

“I expected a great fight,” he said. “He’s a warrior and I knew it would be a hard fight. … The fouls were weird because he did them three times. The last one, I saw him stand up and so I just blocked my ribs. Thanks to God to give me the strength to get to the end of the fight.

“After my last fight I asked for someone in the top 10 or top five and no one answered me,” he added, looking ahead to his next fight. “So I don’t care. I’m healthy and happy. I’ll be ready.”

Prior to his loss to Leonardo Santos, Roman Bogatov had never been beaten as a pro mixed martial artist. At 10-1, time will tell where the next phase of his career unfolds.