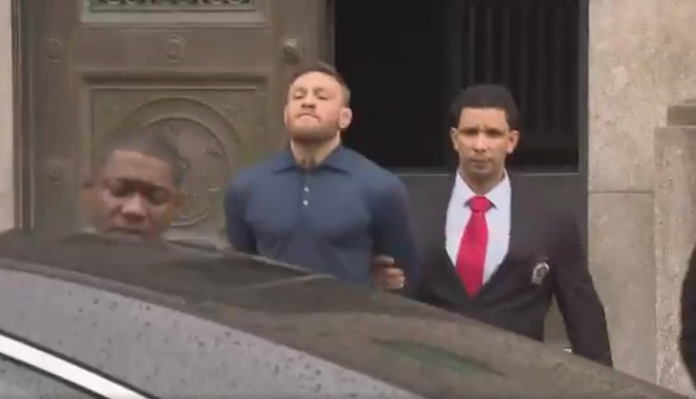 The Miami Herald has reported that former UFC featherweight and lightweight champion, Conor McGregor was arrested in Miami, Florida on Monday.

The Irishman is being charged with “strong-armed robbery and misdemeanor criminal mischief” following an incident that saw McGregor smashing a fan’s cell phone according to the report. The incident is believed to have happened around 5:00 AM when the fan was photographing McGregor outside of the Fontainebleau Miami Beach hotel.

MMAjunkie has since reported that the Miami-Dade County Jail has listed McGregor’s charges of strong-arm robbery and criminal mischief of $1,000 or more that came with bonds of $7,500 and $5,000.

Of course, this isn’t the former champion’s first run-in with the law in America as the first big incident for McGregor was during UFC 223’s fight week when he stormed the Barclay’s Center with his teammates and threw a dolly through the fighter bus window.

McGregor is currently serving his suspension from the Nevada State Athletic Commission (NSAC) in regards to his post-fight brawl with Khabib Nurmagomedov at UFC 229 in October 2018. The suspension is set to end in early April.

The fight with Nurmagomedov was McGregor’s most recent where he was seen succumbing to a fourth-round submission via neck crank. It was McGregor’s first MMA fight since November 2016 when he defeated Eddie Alvarez at UFC 205 to become lightweight champion.

Despite his current suspension, there were rumblings of a potential bout with Donald “Cowboy” Cerrone being in the works but nothing ever ended up coming to fruition as the UFC apparently wanted the fight to be a co-main event. An idea that was rejected by McGregor.

It now looks as though Cerrone may go on to face Al Iaquinta while McGregor’s immediate future is now in even more question than it already was prior.