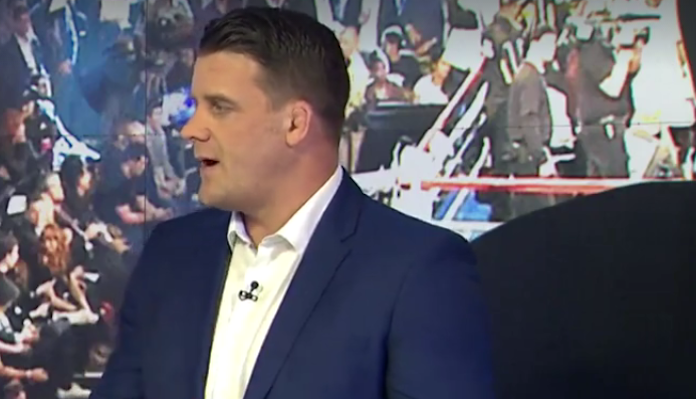 After four rounds of non-stop action in the main event of UFC 245, Usman knocked Covington down in the fifth. Goddard intervened and put a stop to the action, awarding Usman the TKO victory.

Covington has since protested the finish and vocalized his disdain for Marc Goddard.

“How f*cking stupid are you Marc Goddard? Get a new job because you f*cking suck at your job you piece of sh*t. And stay in England, don’t come back to America you f*cking c*cksucker,” Covington told The Score of Goddard.

“I promise you Marc Goddard will not come within 10 feet of me in the same room of anything I ever do in my life without getting smacked and without getting a wedgie upside his head.”

In the UFC 245 aftermath, Marc Goddard has endured an onslaught from pro-Covington fans. Covington’s fans have even gone as far as to send death threats.

Goddard divulged that he received death threats on an episode of the LISTEN! podcast with former fighter and UFC commentator Dan Hardy. The referee also responded to Covington’s comments, calling them “totally inappropriate,” “abusive” and “threatening”.

Despite the verbal storm that has come his way, Goddard said he will ride out the bad weather in a professional manner.

“I’m a professional, I take it in stride…Difficult fight [but] I know I handled it on the money, to a T,” he said.

“I didn’t respond [to Covington’s comments], I didn’t have to,” he added. “Where would that leave me? On a professional basis, I get into it with a fighter on Twitter? [Then] I’m always going to come off worse. So you rise above and then you move away.”

“The abuse was incalculable from that fight. But you know what, suck it up, because you’re an official and that’s your job.”

Marc Goddard even revealed that prior to the bout, Colby Covington said he was pleased that he would be the referee. Goddard continued to defend his fight call and articulated his reasoning.

“Should I have? And this is the point I make when I’m assessing what happened, I’m assessing the position he’s in, the two knockdowns, he’s being punched, I don’t want to leave him. And boom, my trigger’s pulled,” Goddard added.

”My job is to protect you, and regardless of you getting up and telling me you’re fine, at that point, it’s over.”

What do you think of this response from Marc Goddard?