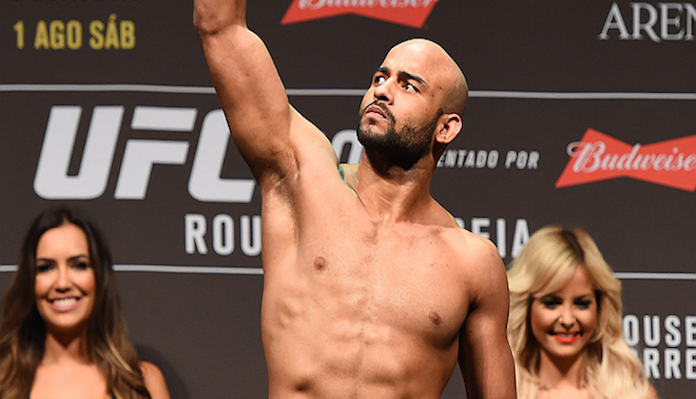 Check out how the pros reacted to welterweight Warlley Alves knocking out Mounir Lazzez in the co-main event of UFC Fight Island 8.

Alves came into the fight as a considerable underdog but pulled off a stunning upset when he knocked Lazzez out in the first round with body kicks. Alves landed three left kicks in a row to the body of Lazzez, which led to his opponent crumpling to the canvas in pain. It was a stunning victory for Alves, who badly needed it. As for Lazzez, it was a big upset according to the odds, and he will look to get back to the drawing board in his next outing.

A former Ultimate Fighter Brazil winner, Alves was at one point in his career an undefeated prospect with a 10-0 record. That included a submission win over Colby Covington at UFC 194 in December 2015, but after that big victory, he just hasn’t been the same. Coming into this bout with Lazzez, Alves had lost three of his last four fights. For his sake, hopefully, this win over Lazzez is what he needs to get back on track in his career and live up to the potential.

Check out what the pros had to say about Alves vs. Lazzez below.

3 vicious left body kicks in a row by Warlley Alves puts Lazzez away!!! That was crazy. #UFCFightIsland8

How on earth was Warlley Alves +200 in that fight?

The win over Lazzez should earn Alves another highly-touted foe in his next outing. For all of his struggles in the UFC, he is still a very talented fighter with big-time knockout power and submission prowess. The victory over a fighter on the rise like Lazzez could potentially earn Alves a top-15 opponent next.

Who do you want to see Warlley Alves fight after his stunning knockout over rising prospect Mounir Lazzez at UFC Fight Island 8?