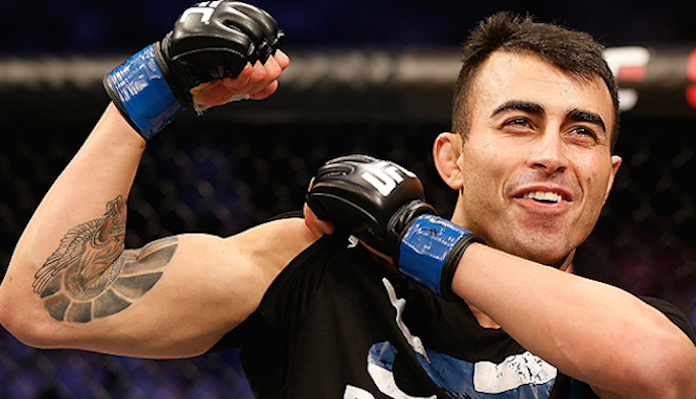 Makwan Amirkhani — widely known as “Mr Finland” — is back.

UFC officials announced Monday that Makwan Amirkhani will return to action June 1st against Chris Fishgold at UFC on ESPN+ 10 in Sweden.

Makwan Amirkhani (13-3) hasn’t fought since a split decision victory over Jason Knight at UFC Fight Night 130 in May, 2018. With the win, the SBG Ireland product bounced back from his lone loss in the octagon, a split decision setback against Arnold Allen at UFC Fight Night 107. Amirkhani racked up a 9-2 record before signing with the UFC in 2015, including a win over UFC bantamweight Tom Duquesnoy. The Iraqi born fighter would make a memorable UFC debut where he knocked out Andy Ogle at UFC on FOX 14 in eight-seconds and then went on to win his next two-fights. Despite his impressive 5-1 record in the octagon, Amirkhani has only fought three times since 2016 and isn’t ranked Top 15 featherweight rankings.

Chris Fishgold (18-2-1) is coming off his first UFC victory last month, as he submitted Daniel Teymur in the second round at UFC on ESPN+ 3. Prior to that, the 26-year-old dropped his UFC debut to Calvin Kattar at UFC Fight Night 138 where he was finished via strikes in the first round. The former Cage Warriors lightweight champion joined the UFC last year after amassing a 17-1-1 record. Fishgold has finished 15 of his opponents (13 by submission) and has only gone the distance four times in 20-career fights.

Who do you think will win in the newly announced Makwan Amirkhani vs. Chris Fishgold matchup at UFC Stockholm?