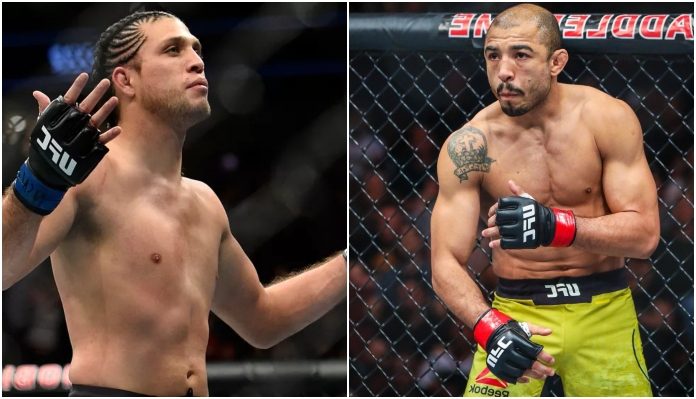 The last time we saw ‘T-City’ Brian Ortega inside the Octagon, he went to war with the current champion of his division, Max ‘Blessed’ Holloway.

Unfortunately for the challenger in Ortega, he would walk away with his first career defeat as the ors didn’t allow him to continue into the fifth and final round as the fight was deemed a fourth-round TKO win for Holloway.

After taking some time off and healing up from some injuries he sustained in that bout, Ortega now has his eyes on the future. And for his next challenge, he hopes to face the legendary Jose Aldo.

“Whichever makes sense to get me closer to the title,” Ortega told FanSided when asked who he wants to fight next. “I’ve never had anything personal against anyone of these guys. I always chase the title and the fights that will make me the number one guy in the world. Right now, the only fight that makes sense is [Jose] Aldo. We both lost to Max and we’re number one and two. He beat everyone else and I beat everyone else. It’s just me and you. Unless you want to fight down — and that’s fine — but I want to fight up.”

For Aldo, the former two-time UFC featherweight champion has said that he plans to fight out his contract and then retire. And after adding on another fantastic win over Renato ‘Moicano’ Carneiro at UFC Fortaleza earlier this month, he now has two left which he hopes to finish up in his native country of Brazil.

Assuming that Aldo and the UFC are open to it, it wouldn’t be crazy to see this match-up landing on the UFC’s next event in Brazil which will be UFC 237 on May 11.

Aldo has expressed interest in facing rising contender Alexander Volkanovski next, however, so it will be interesting to see what happens next within the division.