Brock Lesnar is no longer under contract with World Wrestling Entertainment and thus rumors of a potential return to the UFC have started swirling.

The former UFC heavyweight champion, Lesnar (5-3 MMA, 1 no-contest), has not competed inside of the Octagon since UFC 200 in July of 2016. That evening in Las Vegas ‘The Beast’ squared off with knockout artist Mark Hunt and wound up emerging victorious by way of unanimous decision.

However, shortly following the historic event it was announced that Brock Lesnar had tested positive for Clomiphene and thus his win over Hunt had been overturned to a no-contest.

With that said, according to Lesnar’s longtime friend and former Olympic Gold medalist Kurt Angle, ‘The Beast’ will only return to the Octagon for one fight.

“I know he said that he’s retired,” Angle recently told reporters (via TheMacLife). “The one fight he wants, and I don’t know if it’s ever going to happen, but he wants to go up against Jon Jones. Brock’s told me that several times, that’s who he wants… I think that might be the only way to get Brock to fight. I think he just wants Jones.” 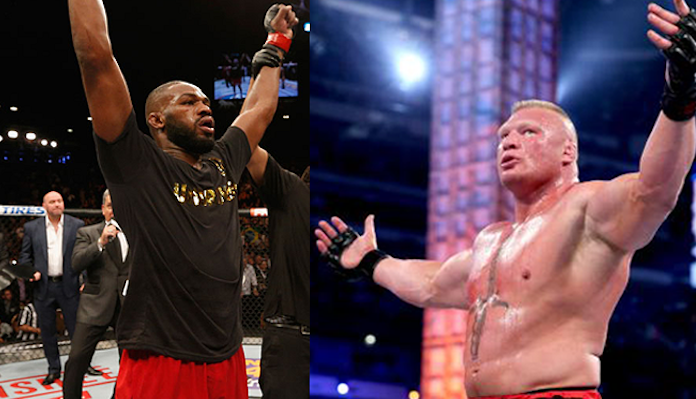 That news will come as a disappointment to reigning UFC heavyweight champion Stipe Miocic, who recently told Jon Jones that if Brock Lesnar were to return he would have first dibs on the WWE star.

The timing does line up well for a potential superfight between Lesnar and Jones. ‘Bones’ recently vacated his light heavyweight strap in order to pursue the promotions coveted heavyweight title.

Do you think we will see a future fight between Jon Jones and Brock Lesnar?