“The Eagle” was able to dominate the Irishman on the ground and even dropped Conor McGregor with a right hand in round two.

Nurmagomedov would eventually finish “Mystic Mac” in round four, this after he locked in a nasty neck-crank submission which forced McGregor to tapout.

Immediately after scoring the biggest win of his professional mixed martial arts career, Khabib Nurmagomedov proceeded to leap out of the cage and attack McGregor’s teammate Dillon Danis.

Khabib’s post-fight actions sparked brawls to ensue both inside and outside of the octagon, leaving a black eye on what was a terrific pay-per-view event for the promotion.

Due to his UFC 229 post-fight actions, Khabib Nurmagomedov has yet to receive his $2 million payday from the Nevada State Athletic Commission. “The Eagle” and Conor McGregor both received temporary suspensions for their actions last Saturday. An official hearing to decide the full extent of the two fighters punishments is set for October 24.

During his first exclusive interview since the now infamous incident, which took place earlier today on Moscow’s Channel One station, Khabib Nurmagomedov revealed that he believes Conor McGregor was already “broken” before their fight at UFC 229.

His words via MMA Team Dagestan.

“A man can say anything, but when you get face to face and look into your eyes… you can understand what is happening there. He (Conor McGregor) pretended to look into my eyes, but I felt that he was looking between the eyes. He did not look into my eyes he was broken.” 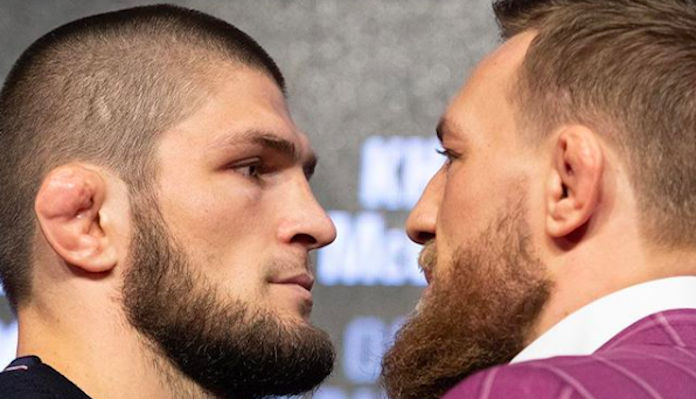 “When I went inside the cage looked at his condition. I told my brother he was already broken. Brother tells me ‘Do not think about it, tune in.’ I replied, ‘I say this to reduce your worries.'”

Conor McGregor has already stated that he is “looking forward” to a rematch with the undefeated Russian.

However, Khabib Nurmagomedov has threatened to leave to promotion entirely, this if his teammates who were involved in the UFC 229 post-fight brawl are fired by the UFC.