Late last night, the famous Rapper took to Instagram where he extended Khabib Nurmagomedov a $2 million offer to come and fight under the Bellator banner. “Fifty” also insinuated that the UFC has been mistreating “The Eagle“.

“I think it’s wrong what the UFC is doing to Khabib, they didn’t do the same thing to McGregor. I’ll pay 2 million cash tonight if he (Khabib) will fight for me and Bellator.”

“@khabib_nurmagomedov I’ll deal with Dana and your contract later. The UFC is not the only game in town. Zubaira is welcome also. #bellator #lecheminduroi” – 50 Cent

Khabib Nurmagomedov is currently in some hot water, this after he jumped out of the octagon and attacked Dillon Danis just moments after submitting Conor McGregor in the main event of UFC 229.

Due to his actions, the UFC and NSAC are withholding Khabib Nurmagomedov’s $2 million fight purse. “The Eagle” has also received a temporary suspension, with an official hearing to determine his full punishment scheduled for October 24. 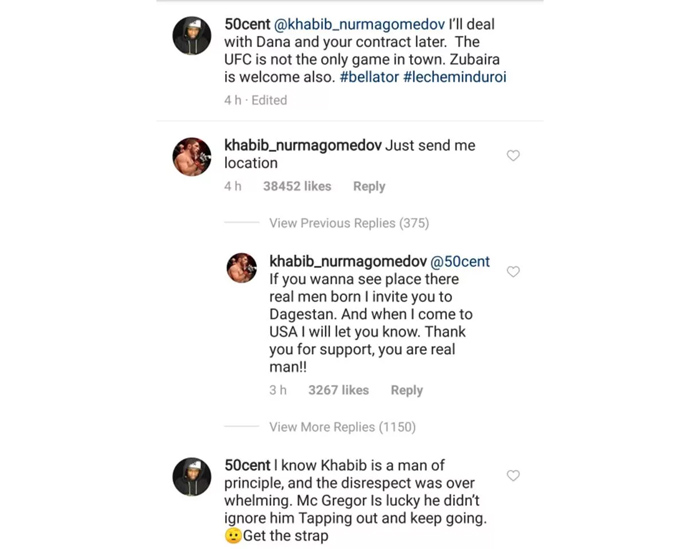 “Just send me location,” Nurmagomedov responded in the comments.

“The Eagle” continued by inviting 50 Cent to Dagestan.

“If you wanna see place there real men born I invite you to Dagestan. And when I come to USA I will let you know. Thank you for support, you are real man!,” he added.

That comment was well received by the famed rapper who promptly replied with the following.

“I know Khabib is a man of principle, and the disrespect was overwhelming. McGregor is lucky he didn’t ignore him tapping out and keep going. Get the strap,” 50 cent wrote.