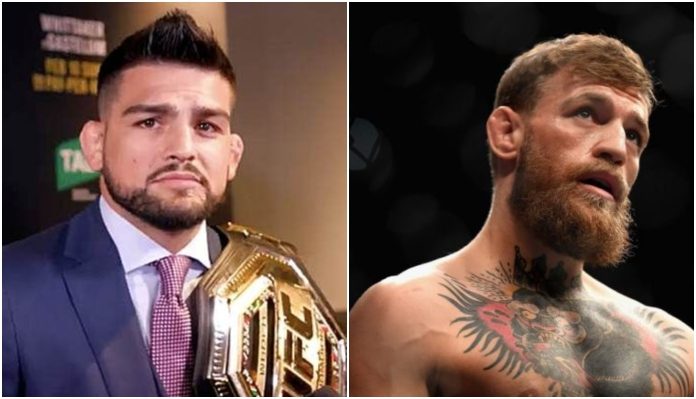 UFC 234 ended up being a pretty wild night of action as expected.

Unfortunately, on the day of the event, it had lost its headliner as the middleweight champion, Robert Whittaker, had to undergo emergency hernia surgery.

That left the challenger Kelvin Gastelum without a fight and promoted Israel Adesanya vs Anderson Silva to the main event slot.

Following the news, Gastelum revealed his sorrows and wished Whittaker a speedy recovery.

That was before he showed up to the Rod Laver Arena with the new UFC legacy title where he proclaimed that he had ‘earned it’.

We would later find out that the title actually belonged to the current flyweight champion Henry Cejudo who was at the event as a guest fighter.

On top of that, we found out that Gastelum was battling a staph infection which then garnered some scathing remarks from Conor McGregor who questioned why a ‘worm’ like Gastelum was walking around with the title.

Of course, Gastelum wasn’t too fond of that as he fired back on Monday.

“Oh my god, you want to talk about a leper?” Gastelum said of McGregor on Ariel Helwani’s MMA Show. “A guy that’s full of disease that’s spreading disease all over Ireland? That’s Conor McGregor. He’s spreading his seed all over Ireland, impregnating ladies and not claiming them. That dude’s a leper. Forget him.”

Gastelum is, of course, referring to the recent allegations against McGregor in regards to a child that may be his that isn’t with his longtime girlfriend Dee Devlin.

Whether or not the winner of season 17 of The Ultimate Fighter will still get his title shot next remains to be determined after Adesanya’s win. However, if there’s any truth to UFC President Dana White’s words, he will indeed be getting just that.