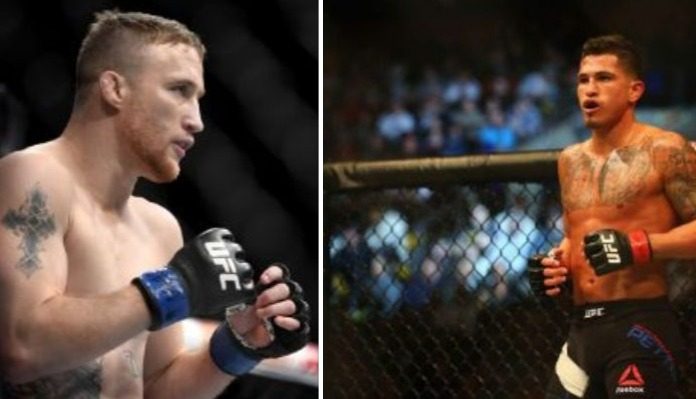 Ask and you shall receive. That appears to be the case now as the former UFC champion Anthony “Showtime” Pettis (21-8) gets the fight he was interested in for his next time out.

After a war in his last fight with Tony Ferguson at UFC 229 that saw him suffer a broken hand, it would seem safe to assume that Pettis wouldn’t be rushing back too quickly to get another dangerous fight. Well, guess again.

ESPN’s Brett Okamoto has reported that the UFC is looking at making Pettis vs former World Series of Fighting champion, Justin “The Highlight” Gaethje (19-2) at some point early next year.

Per multiple sources, UFC looking to book Justin Gaethje vs. Anthony Pettis. It's not done and there's no date just yet, but that's the matchup currently in the works. Would be early next year.

Per multiple sources, UFC looking to book Justin Gaethje vs. Anthony Pettis. It’s not done and there’s no date just yet, but that’s the matchup currently in the works. Would be early next year.

Both are two of their division’s most entertaining fighters, for Gaethje however, his last fight came in a much more surprising fashion than we’re used to.

Known for going to war in practically every single one of his fights, it was different last time for the Safford, Arizona native as he dispatched of James Vick via knockout in just under 90 seconds into their UFC Lincoln main event.

The win would snap Gaethje’s first and only losing streak of his career that saw him taste defeat at the hands of Dustin Poirier and former UFC and Bellator champion Eddie Alvarez. Both of which happen to be men to have also defeated Pettis somewhat recently.

Despite some rough goings since his time at the top of the mountain, Pettis has seemingly shown to be more invigorated since losing to Poirier last November. With that in mind, it will be very fun to see how he handles someone with the relentless of Gaethje assuming the fight comes to fruition.