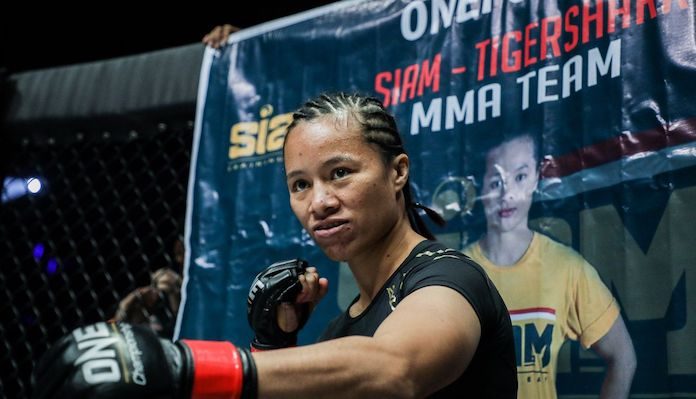 It might be time to acknowledge that Indonesia’s Priscilla Hertati Lumban Gaol (4-3) could be the hardest working athlete in ONE Championship.

Lumban Gaol is scheduled to take part in her sixth match of the year on Saturday 17 November. The wushu specialist will go head to head with Filipina Angelie Sabanal at ONE: WARRIOR’S DREAM, which will take place at Jakarta’s Stadium Istora.

By the conclusion of the bout, Lumban Gaol, win or lose, will have competed in almost a third of all events held by ONE Championship in 2018. That is a staggering statistic for any mixed martial artist, let alone an athlete who is competing at the highest level of the sport.

It could be argued that this relentless schedule could be overly taxing on the 30-year-old atomweight, but one look at her recent results silences that suggestion. The fighter nicknamed “Thathie” has gone 4-1 since entering the cage back in January at ONE: KINGS OF COURAGE and her performances have steadily improved as the year has gone on.

She started the year off with three straight first-round wins but then ran into a road-block in the form of Malaysian prodigy Jihin Radzuan in July. Radzuan controlled Lumban Gaol on the ground for the majority of the bout and earned herself a unanimous decision victory.

It was a fork in the road moment for Thathie. The type of moment when an athlete will reveal their true colors. Would her confidence falter after the loss or would she pick herself up and go straight back to work?

Thankfully for her fans, Lumban Gaol took the latter path. She shrugged off her loss to Radzuan and decided to use the defeat as a learning opportunity. During the intervening period between bouts, Lumban Gaol shored up the holes in her grappling that had been exposed by the Malaysian.

In her next outing against the undefeated Jomary Torres at ONE: CONQUEST OF HEROES she emerged looking sharper and better than ever. Torres came out strong in the first round and looked to take Lumban Gaol to the ground, where the 22-year-old believed she would have the advantage. However, throughout the three rounds, Lumban Gaol dominated the grappling exchanges, demonstrating the time spent honing her wrestling skills had been worth it. The former Indonesian National wushu champion took home a unanimous decision victory, due in no small part to her much-improved ground game.

Lumban Gaol left the cage that night with not only another win under her belt, but having established in the minds of fans and pundits that she had become as dangerous off her feet as she was on them. Still, mixed martial arts is a sport where athletes are often judged on their most recent performance.

Lumban Gaol has poured the foundations for a title run in 2019 but the cement has not yet set and a loss to Sabanal could alter Lumban Gaol’s entire year.

Sabanal defied the odds and defeated Rika Ishige at ONE: IRON WILL in her promotional debut and immediately established herself as a threat in the atomweight division.

A national Muay Thai silver medalist, Sabanal will not be fazed by the challenge of facing Lumban Gaol on home soil, she will go into the bout relaxed and confident, knowing that all the pressure will be on her opponent’s shoulders.

For Lumban Gaol, the stakes are now a lot higher than they were back in January. The hours in the gym, the dedication to her training and the willingness to fix what needed to be fixed in her game have all helped put her on the possible cusp of a title shot.

She now needs to end the year as strongly as she started it.

What do you think the future holds for ONE Championship’s Priscilla Hertati Lumban Gaol?