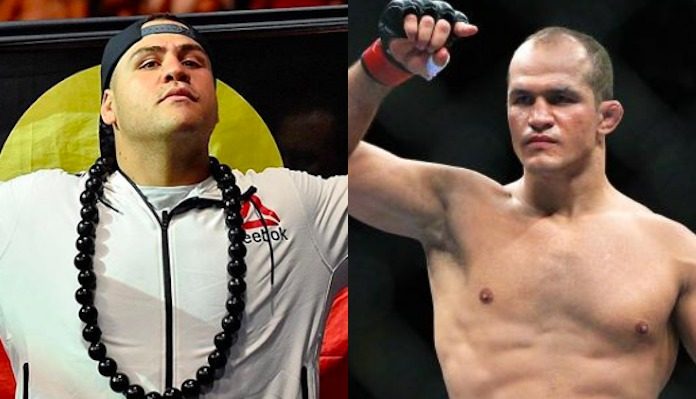 On December 2, the UFC heads back down under for UFC Adelaide which will showcase the big men as Junior Dos Santos heads into enemy territory vs Tai Tuivasa.

Often a kinder and more gentle giant outside the Octagon, the former UFC heavyweight champion Dos Santos had nothing but kind words for his next opponent. That was until he discovered the label that Tuivasa has given himself when being introduced prior to his fights.

“In his last fight, with [Andrei] Arlovski, when Bruce Buffer was introducing him, he said he represents street fighting,” Dos Santos told Sporting News, “I was watching the fight last night, and saw that and was like ‘what?! That’s not even a martial art’

I thought I was fighting against a martial artist, but that’s not the case. I want to know more about this, and one day I’ll ask him.

Everyone, all the gyms around the world, are fighting against that – against this kind of stupid thing, this coward thing. It doesn’t exist. You’re not a street fighter, you’re a coward. These people who fight in the streets don’t really know how to fight.

Dos Santos returned to action in July after being out for over a year after his loss in his rematch with the then champion Stipe Miocic at UFC 211. In his return at UFC Boise, he got back in the win column by spoiling the UFC debut of the former World Series of Fighting champion Blagoy Ivanov in a five-round affair

And after watching Tuivasa’s most recent fight which was the biggest win of his career over one of Dos Santos’ fellow former heavyweight champions, ‘Cigano’ stated that despite looking good, it won’t matter for the Aussie going forward.

“He put in a good performance against Arlovski, but that doesn’t matter. I’m gonna go in there and knock him out. This is my first strategy. Whenever I fight, I’m going for a knockout. And I’m gonna knock this guy out. I know he likes to stand up and bang, so it makes it more special.

They’ll be going for their guy, and I like the Aussie fans and their energy for the sport. I appreciate that, but I’ll have to give them some hard tips. Their guy will get his ass kicked on December 2. Either way, I’ll be there to celebrate. I’ll be celebrating my win, but if they want, they can join in.”

With the rare hostility from Dos Santos in mind, Tuivasa responded with something short and…not so sweet.

“Tell him to go f*ck himself.”