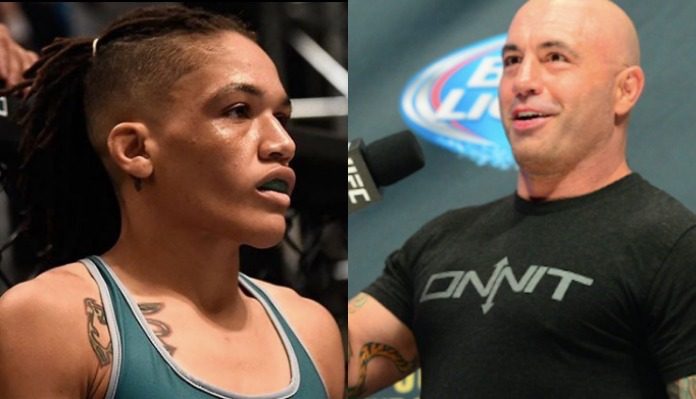 Women’s flyweight contender Sijara Eubanks plans on giving UFC commentator Joe Rogan a piece of her mind the next time she has a post-fight interview.

Earlier this month it was reported that Sijara Eubanks (5-3 MMA) was set to face former bantamweight title challenger Valentina Shevchenko for the vacant UFC flyweight championship in the main event of UFC 230.

Soon after that announcement was made, longtime UFC commentator Joe Rogan commented on the news during his JRE Podcast:

“No offense, but I don’t even know who Sijara Eubanks is, and I’m the commentator for the UFC.” stated Rogan.

Most recently it was announced that the proposed UFC 230 headliner between Valentina Shevchenko and Sijara Eubanks had been cancelled in favor of a heavyweight title fight between reigning “baddest man on the planet” Daniel Cormier taking on surging contender Derrick Lewis.

Meanwhile, Eubanks will remain on the November 3 fight card in New York, as she is now slated to face veteran Roxanne Modafferi.

The 33-year-old, Eubanks, has not forgotten the remarks made by UFC commentator Joe Rogan which occured shortly following her initial booking against “The Bullet”.

Sijara was a recent guest on The MMA Hour with Luke Thomas where she stated her intentions of one day confronting Joe Rogan about his words face to face inside the octagon.

“I tweeted at him but he didn’t tweet back. Joe Rogan knows who I am, he knows who I was before I said it. He didn’t have to say that on his blog. I thought it was disrespectful.”

“Me and Joe… I am not happy with Joe Rogan. He can’t avoid interviewing me one day. One day he is going to find himself with me in the cage with the mic and I’m going to let him know exactly how I feel!”

If Sijara Eubanks can defeat Roxanne Modafferi at next month’s UFC 230 event in New York, it will be very interesting to see how her post-fight interview with Joe Rogan plays out.