Pena (11-4 MMA) and Rousey (12-2 MMA) first met on Season 18 of ‘The Ultimate Fighter‘ where ‘Rowdy’ served as a coach opposite her longtime rival Miesha Tate.

‘The Venezuelan Vixen’ was a member of ‘Team Tate’ and went on to win the competition by scoring a first round TKO victory over Jessica Rakoczy in the tournament finale.

During a recent interview with The NY Post, Julianna Pena discussed how being friends with Miesha Tate resulted in some heat from opposing coach Ronda Rousey.

“She really had a tough time getting along with me on The Ultimate Fighter,” Pena said. “She didn’t like me at all because I was friends with Miesha Tate. She wasn’t the nicest.” 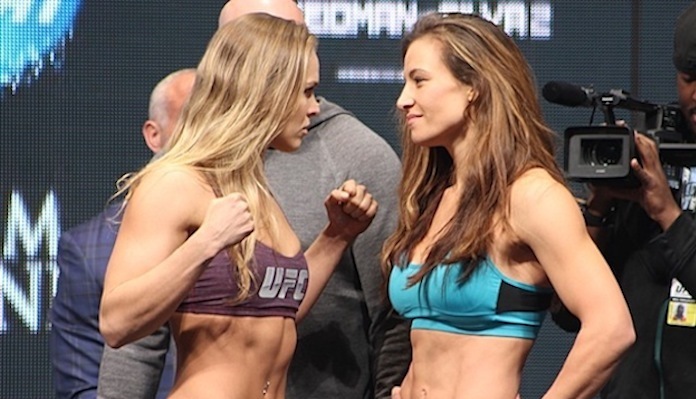 Rousey hung up her gloves following a first round stoppage loss to Amanda Nunes in December of 2016. Despite her lengthy absence from the sport, Pena would be more than willing to give ‘Rowdy’ an opportunity at her belt.

“It would be amazing to pull Ronda Rousey back out of retirement. It would be great to have her come back to UFC and fight again.”

“I don’t know that she’ll recall this because she ended up getting taken out by her entire team. But, when we won ‘The Ultimate Fighter’ and got out of the house, she told me that, ‘You’re gonna give me a tougher fight than Miesha Tate, but when that day comes I’m still gonna kick your ass….’ I kind of said to her, ‘We’ll see.”

A rematch between ‘The Venezuelan Vixen’ and ‘The Lioness’ is expected to take place early this summer.

Would you be interested in seeing a grudge match between Pena and Rousey?