While it was a spectacular performance from ‘Gamebred’, who dropped Diaz on multiple occasions throughout the fight, Masvidal’s performance was seemingly overshadowed by the bouts controversial finish.

At the end of the third round Nate Diaz went back to his corner to recover and receive instructions from his coaches. During that time the cage side doctor came in to take a look at the cuts Nate had suffered during the opening fifteen minutes of action.

After close assessment, the doctor decided to call the fight deeming Nate Diaz unfit to continue.

The disappointing outcome sparked a ton of negative reactions on social media, but surprisingly UFC President Dana White was not upset with the ruling (see his comments here). 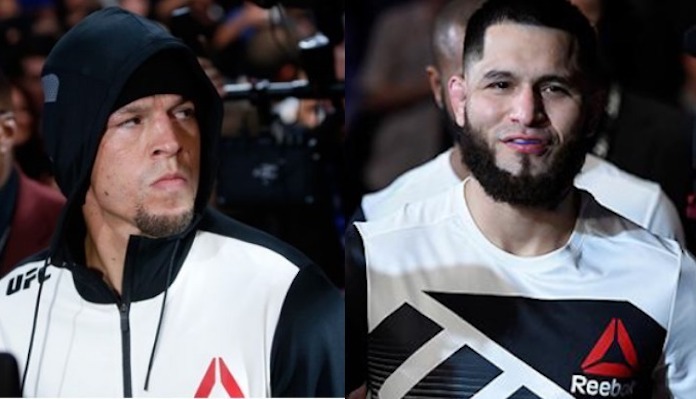 The same could not be said for Jorge Masvidal’s opponent Nate Diaz, who went off on the ruling and the UFC’s shady treatment during the UFC 244 post-fight press conference. The Stockton Slugger was so upset he even told ‘The Rock’ he could get it too.

While Jorge Masvidal has already said that he will grant Nate Diaz an immediate rematch, questions were bound to be asked about a potential fight with former two-division UFC champion Conor McGregor.

‘Gamebred’ had the following message for ‘Mystic Mac’ when asked about a potential fight with the Irishman.

“I’ll f*ck that little guy up. I get it why people want to see him hurt for the stunts he’s been pulling. You see he punches old people in the face because those are fights he could win.”

Would you like to see a future scrap between UFC stars Conor McGregor and Jorge Masvidal? Who do you think would emerge victorious if ‘Gamebred’ and ‘Mystic Mac’ were to throw down? Sound off in the comments section PENN Nation!

This article appeared first on BJPENN.COM
Previous articleDarren Till details “craziest week of his life” following UFC 244 win
Next articlePhoto | Jorge Masvidal was up big on the judges scorecards after 3 rounds
© Newspaper WordPress Theme by TagDiv