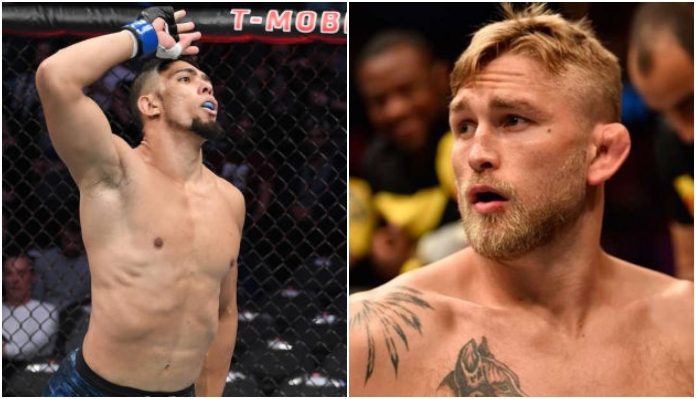 At UFC 235, we were treated to awesome performances aplenty. Two of which were brought to us by light heavyweights.

While one of those belonged to the division’s champion, Jon Jones, the other was the rising star from Brazil, the 6-foot-6 highlight machine, Johnny Walker.

Walker made a quick turnaround to take on Misha Cirkunov after knocking out Justin Ledet in 15 seconds at UFC Fortaleza in early February. Walker would go on to pick up another quick win by finishing Cirkunov via flying knee knockout in just 36 seconds.

Unfortunately for the former male stripper, he would injure himself when celebrating his victory as he went to do ‘the worm’.

However, ESPN’s Ariel Helwani has confirmed with Walker’s manager that the injury isn’t severe and he even has an idea for his next fight already in mind.

“Johnny Walker just got his MRI results back. Per his manager, he has a mild shoulder injury. He’ll need four weeks of rehab. They’re shooting for a return in May or June and are interested in fighting Alexander Gustafsson in Stockholm, his manager said.” Helwani tweeted.

Of course, the three-time title challenger, ‘The Mauler’ Alexander Gustafsson is Sweden’s finest fighting son, so assuming he’ll fight at the UFC’s return to Stockholm on June 1 is no wild prediction.

For Walker, it would undeniably be his biggest fight to date and kind of an interesting choice by the Brazilian after saying earlier on Monday that he doesn’t think he’s ready for a title shot just yet and thinks three or four fights prior would do the trick… And a potential win over Gustafsson obviously puts him right in line.

Gustafsson, on the other hand, will be looking to rebound in his next fight whoever that ends up coming against, after a second career loss to the champion in Jones.